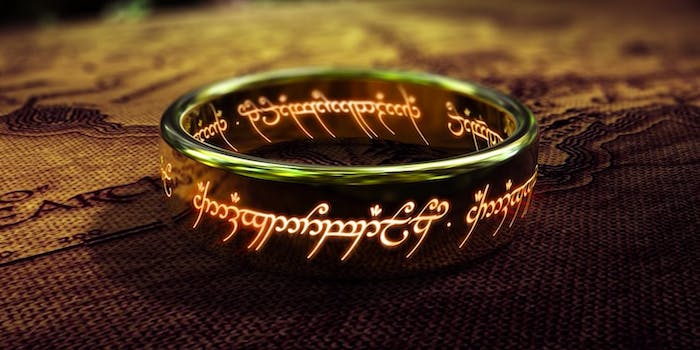 Tolkien's lore is vast and complicated. This is the short version.

It’s been over a year since Amazon announced that a $250 million, multi-season Lord of the Rings show was in the works. Since then, J.R.R. Tolkien fans have received precious little information on the top-secret project. But after cryptically dropping a series of interactive Middle Earth maps, the show’s official Twitter account confirmed the show will encompass Lord of the Rings’ Second Age of Middle Earth.

This means the series takes place well before the events of the Fellowship, despite rumors that LOTR on Prime will follow a young Aragorn. Most casual fans haven’t memorized Tolkien’s impossibly complicated legendarium, so here are some key bits of Lord of the Rings Second Age lore to familiarize yourself with.

Lord of the Rings’ Second Age of Middle Earth: A brief timeline

This era spans almost 3,500 years, from the banishment of Morgoth to the Last Alliance of Elves and Men.

The Lord of the Rings’ Second Age takes place right after the Valar (the angelic, god-like figures of Tolkien’s world) banish Morgoth, Middle Earth’s original mega-villain. Morgoth’s loyal servant Sauron soon begins to take his place by amassing an army of orcs and trolls in Mordor. He then launches a campaign to corrupt the hearts of men and elves by disguising himself as a wise and handsome lord, quite unlike the spiky-armored Sauron we’re acquainted with.

In the early Second Age, the Valar gives the Atlantis-like island of Númenor as a gift to a powerful race of men called the Númenoreans (ancestors of long-lived Dúnedain like Aragorn). The Númenoreans start off the Second Age as dashing heroes but rapidly devolve into violent colonizers of Middle Earth. When they face off against Sauron and his armies toward the end of the Second Age, he corrupts all but a few—leading to most of their race being destroyed by the Valar. The remaining Númenoreans go on to found two new important kingdoms on Middle Earth: Arnor and Gondor.

To sum up: The Númenoreans are promising champions, they mess up big-time, and there ultimately aren’t many left to take on Sauron.

Sauron’s greatest act of deceit in the Second Age is forging the Rings of Power. His disguise allows him to trick elvish smiths into crafting 19 rings: nine for men, seven for dwarves, and three for elves. Meanwhile, he forges the One Ring secretly in Mount Doom to magnify his powers and control the rest of the ring-bearers. Unfortunately for Sauron, the resilience of dwarves lets them withstand his influence. The elven rings were forged without his interference, so he can neither control nor find them or their bearers. Ultimately, only the nine men fall into darkness and become Ringwraiths, or the Nazgûl.

The three elvish rings originally belong to Galadriel (the elven “Lady of Light”), Gil-galad (the high king of the elves) and Círdan (an elven lord and mariner). Gil-galad soon entrusts his ring to Elrond (the wise elf lord of Rivendell). Gandalf and the other wizards don’t arrive until the Third Age, so we probably won’t see him receive his ring from Círdan.

Early wars of the Rings

Lord of the Rings’ Second Age features two important wars: The War of the Elves and Sauron and the War of the Last Alliance.

The former begins mid-Second Age after Sauron forges the One Ring. The elves first try to take on Sauron and fail, losing their leaders in the process. The survivors, including Elrond, flee and found the elvish haven of Rivendell, leaving Sauron to lay waste to Middle Earth. A year later, Númenoreans land on Middle-Earth and destroy Sauron’s armies. He retreats to the East, and the War of the Elves and Sauron ends.

The War of the Last Alliance features the Last Alliance of Elves and Men, formed right at the end of the Second Age. Even dwarves and an array of birds and beasts join the fight. The Alliance destroys most of Sauron’s main army, forces its way into Mordor, and begins a seven-year siege. In an ultimate showdown, Gil-galad and Númenorean king Elendil fight Sauron face to face. After they die, Aragorn’s ancestor Isildur cuts off the One Ring from Sauron’s hand, thus defeating him and ending the war.

Regardless of what Amazon’s writers choose to portray onscreen, the upcoming show will undoubtedly be as epic as the rich world Tolkien envisioned.