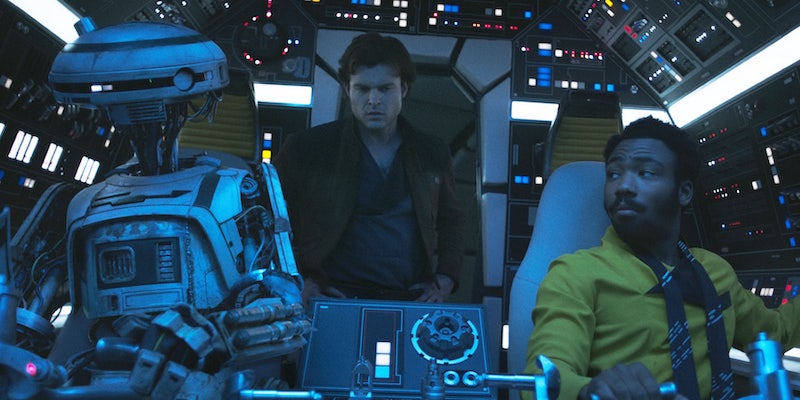 'There’s a fluidity to Donald and Billy Dee’s [portrayal of Lando’s] sexuality.'

While the Star Wars films have become more inclusive on-screen in the past few years, the film franchise still lacks LGBTQ representation. But one of the screenwriters of Solo: A Star Wars Story revealed more information about one character’s sexuality and potentially bringing a first to the films.

In an interview with HuffPost, Solo co-writer Jonathan Kasdan was asked about Lando Calrissian’s sexuality and if the smooth-talking smuggler and gambler-turned politician was pansexual. Kasdan confirmed that he was, noting that the performances we’ve seen from Lando had a “fluidity” to them and that it was time to see more explicitly LGBT characters.

“There’s a fluidity to Donald and Billy Dee’s [portrayal of Lando’s] sexuality,” Jonathan Kasdan explained. “I mean, I would have loved to have gotten a more explicitly LGBT character into this movie. I think it’s time, certainly, for that, and I love the fluidity―sort of the spectrum of sexuality that Donald appeals to and that droids are a part of.”

Lando Calrissian oozes charm wherever he goes and whoever he interacts with, and some fans have read Han Solo and Lando as having some kind of romantic history as far back as Empire Strikes Back. Even from the trailers, fans have already pointed out instances of Lando appearing to flirt with both Han and his droid, L3-37.

But it might also just be a scene. When asked about a specific scene where Elthree jokes about Lando’s flirtations with Han, Lawrence Kasdan said, “That is her personality. Maybe it means something, maybe it doesn’t.”

Although the film appears to have those moments, the references to Lando’s sexuality may be subtle or subtext at most. Kasdan, who co-wrote the script with his father Lawrence Kasdan, noted that he wishes he could have gotten a “more explicitly LGBT character” into the film that he co-wrote.

Most Star Wars fans have yet to see Solo, so they can’t point to certain instances from the film that portray Lando’s sexuality yet. But based off Kasdan’s comments, Lando’s sexuality may still be more subtext than acknowledged fact. It may be yet another example of Hollywood wanting credit for inserting LGBTQ representation in major blockbusters by doing the bare minimum. Subtle acknowledgment is one thing, but critics want films to do better by showing explicitly LGBTQ characters on-screen and not just hinting at sexual identity in interviews after the fact.

The Star Wars universe already has LGBTQ characters including as Amilyn Holdo (whose sexuality is mentioned in Leia: Princess of Alderaan), and the recent Han and Lando novel Last Shot showed Lando in a relationship with a Twi’lek strategist named Kaasha Bateen. Those stories are canon (unless they may contradict something in the movies), but the supplementary material doesn’t have as wide of an audience as the films do. And although Kasdan may say that Lando is pansexual, it’s one thing to say it in an interview and something else to show it in the film. And given that we’re unlikely to see it explicitly in Solo (though future films are always possible), we’re right back where we started: Still waiting for LGBTQ representation in a Star Wars film.