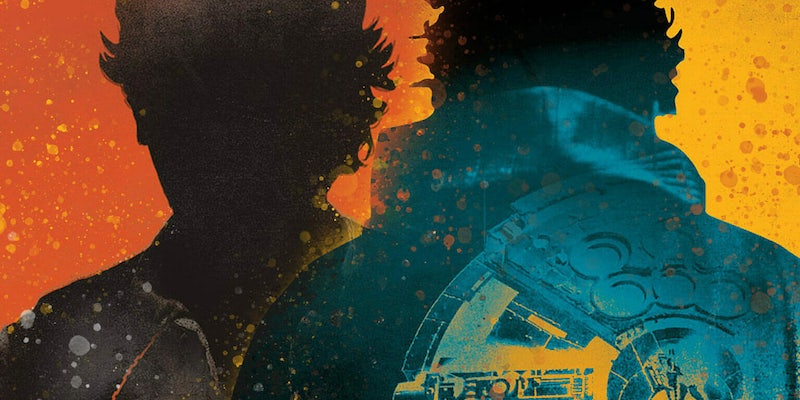 Han grapples with fatherhood and reunites with Lando in the latest 'Star Wars' novel.

To get you in the mood for Solo: A Star Wars Story, Daniel José Older just published a tie-in novel about Han, Lando, and our new favorite droid L3-37. As well as being a characteristic Han Solo rollercoaster of chaos and disaster, it tackles some interesting questions about the role of droids in Star Wars.

Last Shot’s main storyline takes place after Return of the Jedi, when Ben Solo is a toddler. Convinced he’s doing everything wrong as a father, Han is almost relieved when Lando shows up out of the blue and drags him into a dangerous mission. Ten years ago, Han came into contact with a droid-controlling device called the Phylanx, invented by a criminal named Fyzen Gor. Now, he and Lando must find the Phylanx or risk a violent uprising of reprogrammed droids.

The Phylanx may sound rather maguffin-ish, but like all good maguffin stories, Last Shot is mostly about something else. While Han’s role sheds light on his life as a parent, we see parallels in the twisted relationship between Fyzen Gor and his creations. He’s a Frankenstein-like figure who builds an army using droid body parts and organic flesh, which certainly puts Han’s mild parenting flaws in perspective.

The Force Awakens dropped a bomb on our image of Han and Leia’s happily-ever-after. Still, their troubled relationship does make a lot of sense in retrospect. In the original movies, their love story is a passionate affair punctuated by action sequences and arguments. Not necessarily the best foundation for emotional stability. Last Shot shows them still adjusting to domestic life after the war—an adjustment that Han may never fully achieve.

With Leia busy rebuilding a galactic government, Han splits his time between taking care of Ben and feeling out-of-place as an icon of the New Republic. As someone who spent most of his life as a smuggler, he’s far from his comfort zone. However, his new career is, in his own words, “nothing compared with how utterly, obviously, irretrievably unprepared he was for fatherhood.” This sentiment isn’t exactly unusual for first-time dads, but with no parental role models of his own, Han stews over every mistake. He’s characteristically self-sabotaging, and unsuited to Leia’s swanky lifestyle as a diplomat.

This awkwardness sets the scene for Lando’s arrival, allowing Han to slip back into a familiar routine. Sure, that routine involves trading insults with Lando and constantly risking his life, but since when has Han backed down from a fight?

In some ways Han and Lando are cut from the same cloth, sharing a similar daredevil attitude and whiff of untrustworthiness. Lando, however, has always been more put-together and responsible. This guy was in charge of a whole city, after all. So while Han wrestles with his new identity as a father, Lando merely deals with a case of commitment-phobia. (Has this smooth-talking charmer finally found his match with a Twi’lek named Kaasha Bateen? You’ll have to read the book to find out.)

Last Shot doesn’t go deep on Lando character development, maybe because we’ll see more in the upcoming movie. However, this isn’t a really problem because Lando is So. Damn. Fun. It’s exciting just to see more of him. Daniel José Older does a fantastic job of extrapolating on Lando’s relatively minimal screentime in the movies, giving a pitch-perfect portrayal of the slightly sleazy antihero we know and love. Plus, we get to see inside his cape closet. If you’re into space fashion, you’ll be very satisfied with Lando’s palpable love of clothes.

As a precurser to Solo, this book gives us a couple of things to ponder. First of all, it’s a timely reminder that fans often misinterpret Han’s personality. Thanks to Harrison Ford’s innate appeal, it’s easy to forget that Han himself is a total mess. He isn’t a smooth talker, and he’s definitely not good with women. In other words, we tend to ascribe Lando’s character traits to him. Lando is the real charmer, as well as being more successful in his career, and better at talking his way out of sticky situations.

Our second topic to consider is Lando’s droid sidekick, L3-37.

Droids are people too

When it comes to the topic of droid personhood, Star Wars canon is all over the place. The franchise hinges on a struggle between freedom and oppression, incorporating slavery (Anakin) and brainwashed military conscription (Finn), without really tackling the role of droids. R2-D2 and C-3PO are people, yet Luke treats them like property on Tatooine. BB-8 is somewhere between a supersoldier and an adorable puppy, while Rogue One‘s K-2SO was forcibly reprogrammed to switch sides in the war. Droids are treated like appliances or sentient equals, depending on the circumstance. But in Last Shot, we meet an actual droid revolutionary.

Played by Phoebe Waller-Bridge in Solo, L3-37 is a navigator who cares deeply about droid freedom. In Last Shot, she’s our entry point to the philosophical side of droid life. “I know who I am and that all my talk about droid rights makes people uncomfortable,” she says at one point. “The Maker didn’t put me in this galaxy to make organics feel good about themselves, though.”

Like Ron’s attitude to Hermione’s house elf crusade in Harry Potter, Lando treats L3’s politics with condescension. Without laying things on too thick, Last Shot uses this dynamic to explore the unthinking lack of solidarity between droids and organics. To Han, there’s nothing wrong with reprogramming a droid servant if you don’t like their personality. To Lando, droid manufacture is a lucrative business. To the reader, it’s a lot easier to connect the dots with L3’s desire for droid rights. She’s fighting an even bigger war than the one between the Empire and the Rebel forces.

Tying in with Han’s storyline, Last Shot invites us to think about the droid equivalent of parenthood. For instance, is there such a thing as a droid child? They’re built fully-formed, meaning their creators are a cross between a factory, an absent parent, and a god. Fyzen Gor sees droids as a superior life form, but his plan for a droid uprising is melodramatic supervillain nonsense. For starters, it’s not consensual. He wants to turn service droids into killing machines, massacring their organic masters while under his control. L3, on the other hand, has a more inward-focused attitude. She’s building a revolution from the ground up, beginning by augmenting her own body.” Sure, some guy in a factory probably pieced me together originally, and someone else programmed me,” she tells Lando.

“But then the galaxy itself forged me into who I am. Because we learn, Lando. We’re programmed to learn. Which means we grow. We grow away from that singular moment of creation, become something new with each changing moment of our lives—yes, lives—and look at me: these parts. I did this. So maybe when we say the Maker we’re referring to the whole galaxy, or maybe we just mean ourselves. Maybe we’re our own makers, no matter who put the parts together.”

“There’s only so much a droid can do, you know, once it’s been programmed,” another droid tells Lando, later on. “We evolve, sure, but to go all the way against our initial machinations—that takes some time.”

“Organics are pretty similar,” Lando replies. “Now that I think about it.” Han Solo can’t transform overnight from scoundrel to stay-at-home dad, any more than a droid can fully break free from its original programming.