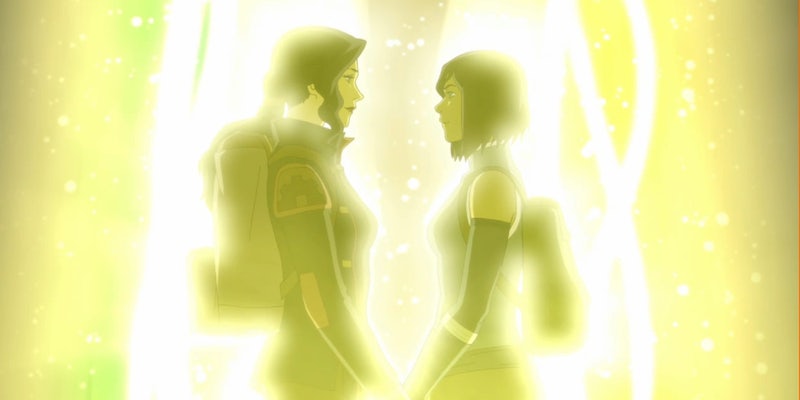 The 'Avatar' series were always groundbreaking for children's TV, and the finale of 'Korra is no exception.

This story contains spoilers for the series finale of Avatar: The Legend of Korra.

Legend of Korra ended with Korra and her friend Asami walking hand in hand through a portal into the spirit world after agreeing to go on a vacation together—”just the two of us.”

For many fans, this was a glorious confirmation of what they’d suspected for years: that Korra was bisexual, and that the show had been foreshadowing a romance between her and Asami. However, not everyone was convinced.

In the days after the finale, fans did what they always do when a TV show ends on an ambiguous note. They argued. Some pointed out that the show had been leading up to a Korrasami romance for a while, with the two characters growing closer and sharing several emotional scenes. But since they didn’t technically kiss onscreen, others argued that Korra and Asami were just good friends.

Then, Legend of Korra co-creators Mike DiMartino and Bryan Konietzko came right out and said it: Korra and Asami are a couple. Understandably, the news hit Korra fans like a bombshell.

I love this so much! HUGE move for an animated show in American TV to have a lesbian lead #KorrasamiConfirmed pic.twitter.com/IGZsrttdrj

In a blog post on Monday night, DiMartino wrote, “Our intention with the last scene was to make it as clear as possible that yes, Korra and Asami have romantic feelings for each other. The moment where they enter the spirit portal symbolizes their evolution from being friends to being a couple.”

In case there were still any doubters, DiMartino titled his post “KORRASAMI CONFIRMED.”

On his own blog, Korra‘s other co-creator Bryan Konietzko added, “You can celebrate it, embrace it, accept it, get over it, or whatever you feel the need to do, but there is no denying it.”

Konietzko also confirmed the popular theory that the visual of Korra and Asami holding hands was deliberately designed to mirror the stance of other romantic couples in the show.

Legend of Korra and Avatar: The Last Airbender both gained cult followings and considerable acclaim thanks to their complex, sensitive storytelling and characterization. Both series were uniquely progressive for children’s cartoons—or for any TV show, really. Vanity Fair proclaimed Korra‘s finale to be “the most subversive television event of the year.”

Looking back on it, Korrasami seems obvious. And to many viewers, it already was. However, if you’ve spent much time in the shipping-obsessed corner of online fandom, you’ll be familiar with the phenomenon that led so many viewers to doubt that Korra would ever follow through with the relationship.

There have been plenty of TV shows that built up what seemed like a same-sex romance, only to backtrack and say the characters were straight (Supernatural‘s Dean and Castiel) or be censored by conservative network standards (Star Trek: Deep Space 9, Xena: Warrior Princess). With the exception of a few rare examples like Willow and Tara in Buffy the Vampire Slayer, it’s almost unheard-of for a slash ship to become canon. Most same-sex pairings are between characters who are explicitly gay or bisexual from the start (Kurt in Glee) or who are given queer-themed storylines.

As a result, anti-gay Korra fans assumed that Korrasami shippers were deluded, while some Korrasami fans were simply pessimistic about the ambiguous nature of those final scenes. “Well, we’ve been burned before,” they thought. Except, for once, they were watching a series whose creators didn’t back down from the queer subtext they’d written into the show. For once, fans were not being queerbaited.

“If it seems out of the blue to you,” wrote Bryan Konietzko, “I think a second viewing of the last two seasons would show that perhaps you were looking at it only through a hetero lens.”

After the numerous difficulties Korra faced in its last two seasons, it’s satisfying to see the show go out on such a high note.  And if The Legend of Korra follows in Avatar: The Last Airbender‘s footsteps with a series of sequel comics, then with any luck, we will see more of Korrasami in the future.