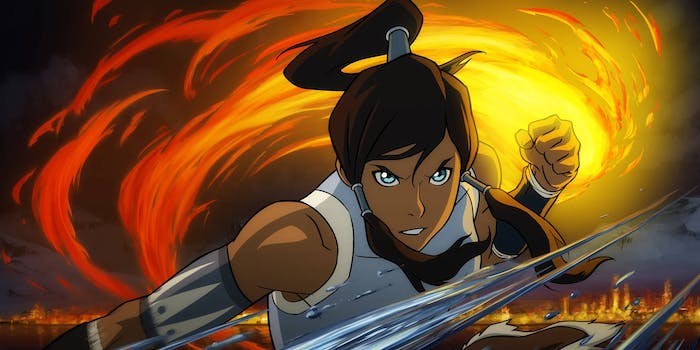 The news comes as a surprise for fans of the show.

In a surprise announcement on Nick.com, the creators of Avatar: The Legend of Korra revealed that the show’s fourth season will start next month. Book 4 will be titled Balance, with the first episode streaming online on Oct. 3.

This is mixed news for Legend of Korra fans. While it does mean that everyone gets their hands on the new season far earlier than expected, this announcement also aligns with Nickelodeon’s botched handling of the series so far.

The show’s third season was widely regarded to be its best yet, but Nickelodeon decided to take it off air halfway through. The last five episodes were released online, and the final season will be aired in a similar fashion. In the Book 4 announcement video, co-creator Michael Dante DiMartino said, “Every Friday on Nick.com and the Nick app, you can watch a new episode—so stay tuned.”

Legend of Korra benefited from the cult fandom surrounding Avatar: The Last Airbender, but ratings suffered during what many people regarded to be sub-par second season. This contributed to Nickelodeon’s decision to pull Book 3 off air, but still didn’t explain why the network abandoned Korra so thoroughly. Advertising was sporadic from the beginning of the third season as schedules were repeatedly reshuffled. Many fans voiced concerns that illegal downloads were the simplest way to watch the show.

Most fans will be glad to see more Korra soon, particularly since Book 3 saw the show finally come into its own and live up to the legacy of The Last Airbender. Unfortunately, this rush to air Book 4 is probably a sign that Nickelodeon is trying to get rid of Korra as fast as possible.

Book 3 will be out on DVD in time for Christmas, and if Book 4 follows the show’s previous formula, it may be finished within three months. After that, there’s no sign that there will be any future installments in the Avatar universe.