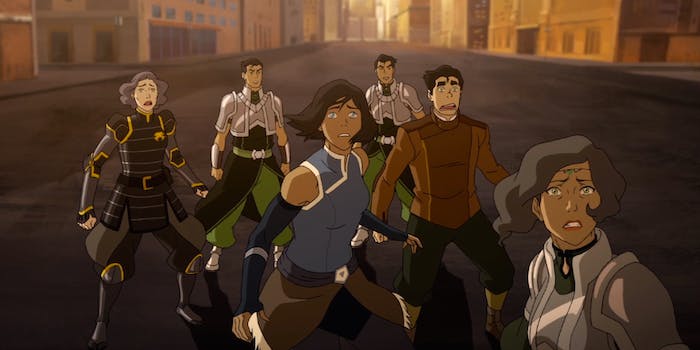 ‘The Legend of Korra’ ends its trying journey with grace

After a rough journey, The Legend of Korra comes to an end.

Warning: This story contains possible spoilers for the series finale of The Legend of Korra.

The Avatar’s journey has come to an end.

The Legend of Korra, the sequel to Avatar: The Last Airbender from Bryan Konietzko and Michael Dante DiMartino that envisioned a female Avatar after Aang, hasn’t had an easy road to its finale. Premiering in 2012, it took a season or two for the show to find its footing, but then it suffered from other issues. Nickelodeon neglected to advertise LoK after some leaks pushed the premiere date up and took it off the air due to low ratings,  dumping it online. With the fourth and final season premiering just two months after the third ended, it looked as though Nick wanted to get rid of the show as soon as it could. Nick eventually reversed the decision, but Konietzko then published a blog post explaining that it had to make one episode a clip show when Nick cut Lok’s budget.

It’s safe to say that fans might be as mentally exhausted as our heroes seem physically when they’re faced with a giant platinum mecha that shoots spirit energy that looks to be as powerful as an atomic blast.

The two-part finale, “Day of the Colossus / The Last Stand,” not only has to wrap everything up and bring things to a satisfying end, it has an unintentionally high standard to match with “Sozin’s Comet,” ATLA’s much-beloved four-part series finale. In both of those regards, LoK succeeds.

The episode’s plot is a fairly simple one. Korra and her friends must stop Kuvira (brilliantly voiced by Zelda Williams) and her army of mecha suits after they start to attack Republic City. The magic involved and the beauty comes in the animation sequences and the use of vibrant colors. Some shows might mask their villains in shadows and place the heroes in bright light, but that’s something too simplistic for LoK. Even at their worst, the villains are still gray.

Even Kuvira, who has been compared to Hitler more than once by fans for her drive to “unite” the Earth Kingdom, sending foreigners and prisoners to “Reeducation Camps,” and exploring the use of more powerful weapons. She may be evil in the traditional sense of the word, but in her mind she was trying to do some good before she became corrupted with power.

And no matter how much you liked the characters or what they did beforehand, LoK made you start caring for them all over again. They sacrifice: a father for his daughter, one brother to another, even from the hero to the villain. Some aspects may have felt a little too convenient and the final battle at the end of a nationwide takeover cleaned up a little too quickly to be realistic, but at the end of a day it’s a children’s show on a network like Nick and you just have to roll with it.

But what will surely have fans buzzing is the final scene of the series. Oh man, that final scene. 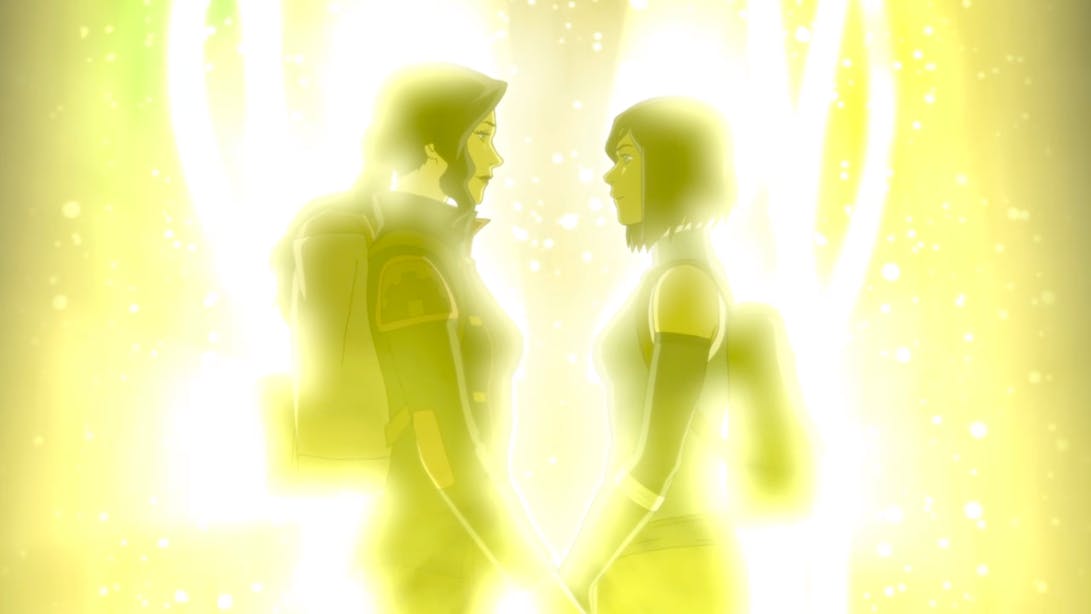 Korra’s romantic endeavors—and who she would end up with at the end of the series—have been on many fans’ minds since the beginning; like ATLA, romance was part of the show, but never a core part. At one point she was linked to Mako, but some would rather see her with Asami, the female engineer and businesswoman who started out as a romantic rival and turned into her best friend.

During a wedding between two characters several weeks later, the two find each other, both needing a break from the craziness of a wedding. Asami was in major need of a vacation, with Korra suggests that they go somewhere away together. More specifically, the Spirit World. In the show’s final moments, these two women, having been through so much already, are holding hands as they face each other. They don’t kiss (as another Avatar did with his love in the finale), but the not-so-subtle gesture goes a long way.

Is Korrasami confirmed? That’s something fans will be arguing for weeks and possibly years to come. But if that was the show’s intention to show something more than friendship, that’s a huge step for an animated show airing on a children’s network, even if the creators may not have been allowed to take that extra step of showing affection. It’s yet another articulate move on the show’s part that’s shown diversity and flawed characters with agency.

LoK went online Friday at midnight EST and aired Friday night on Nicktoons, and the cast and crew have been expressing their gratitude for the fans all day.

In case I haven't said it lately- THANK YOU #korra fans for your wonderful tweets (I do read them all!) — & excitement about the show!

What a beautiful ride. What a wonderful show… Thank you #LegendOfKorra fandom! You have my deepest gratitude.

The journey is over for the cast and the crew, but the fandom will live into the next life.