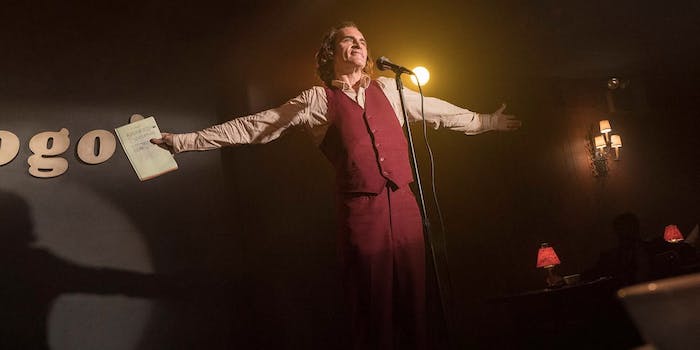 A ‘Joker’ sequel could be in the works from Warner Bros. (updated)

Todd Phillips is in talks to direct.

Phillips, who is in talks with Warner Bros. to direct it, will team back up with Joker co-writer Scott Silver on the script. Joaquin Phoenix would reprise his role as the Joker. Joker, which has been generating awards buzz (particularly for Phoenix’s performance) since its world premiere at the Venice Film Festival, has also been extremely lucrative for Phillips, who is set to make around $100 million for Joker after opting for more adjusted gross over a higher initial salary.

Little is set in stone about the Joker sequel. And although Phillips stressed in interviews about how his film was steeped in realism, the end of the film—which saw the death of Bruce Wayne’s parents, Joker coming into his own, and placement in Gotham Asylum—laid a clear track with enough threads to return to that universe.

The reveal of a sequel comes amid a new report from the Hollywood Reporter that, following the opening weekend success of Joker, Phillips met up with Warner Bros. Picture Group chairman Toby Emmerich to discuss the possibility of developing origin stories for several DC Comics characters.

Although Emmerich shot down Phillips’ request for several characters, Phillips reportedly did obtain the rights to develop “at least one other.” (Darkseid and Lex Luthor are both suggested as options by the Hollywood Reporter, but it’s unclear if those are the characters whose origins Phillips got the rights to.)

With a budget of around $60 million, Joker was extremely profitable for Warner Bros., so it makes sense that it wants to explore that world again. But Joker was also surrounded by controversy thanks to the subject matter, fear of it sparking violence, and Phillips’ own comments. The perfect storm of circumstances made the film, which received the Gold Lion at Venice and received a mixed reception from critics, even more enticing for some viewers who might not have seen Joker otherwise. It’s hard to tell if the character alone will guarantee another box office success.

Update 12:45pm CT, Nov. 20: The Joker sequel might not be as much of a done deal as initially reported. According to Deadline, while Phillips did have a meeting with Emmerich, he didn’t meet with him to discuss developing other DC characters—and that a Joker sequel is not in development; sources also deny that any talks with Phillips and Silver about a sequel have occurred.