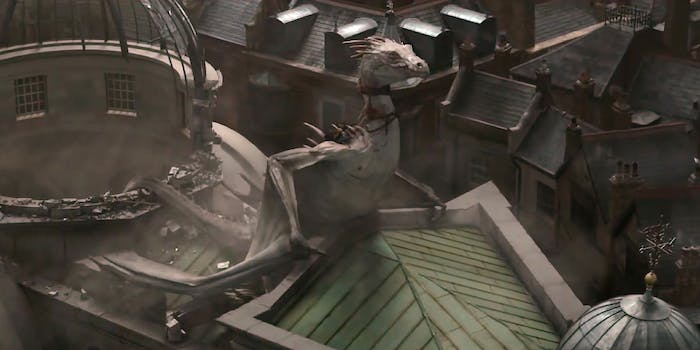 J.K. Rowling’s ‘Fantastic Beasts and Where to Find Them’ begins filming today

We're excited for this movie—with one serious caveat about the casting.

Fantastic Beasts and Where to Find Them, the upcoming Harry Potter spinoff movie written by J.K. Rowling, is finally underway.

Principal photography began on Monday at Warner Bros. Studios in Leavesden, England. This marks an exciting new chapter in the series, and longtime fans will be reassured to know that David Yates (director of the final four Harry Potter movies) and Harry Potter franchise producer David Heyman are in charge of bringing Rowling’s script to life.

With an Oscar-winning actor (Eddie Redmayne) in the lead role and J.K. Rowling in charge of the story, we were optimistic about this film living up to the legacy of the Harry Potter franchise. Unfortunately, there’s one serious issue marring this otherwise exciting news: Everyone in the main cast of Fantastic Beasts is white.

The Harry Potter series is all about fighting back against bigotry and discrimination, so the lack of diversity in Fantastic Beasts feels worse than your average all-white Hollywood blockbuster. Not only does this movie appear to exclude people of color from lead roles, but we know these characters were created by J.K. Rowling—a role model to a generation of fans across the world.

#BREAKINGNEWS: Fantastic Beasts and Where to Find Them to be set in a FANTASY VERSION of 20s New York City in which EVERYONE IS WHITE

Actor Dylan Marron recently concluded a YouTube supercut of every single word spoken by an actor of color in the Harry Potter movies: It’s six minutes total, including the intro for each clip. Fans hoped that Fantastic Beasts would improve on this by casting a more diverse range of actors, especially since it’s set in New York City. But with filming now underway, this doesn’t seem to be the case.