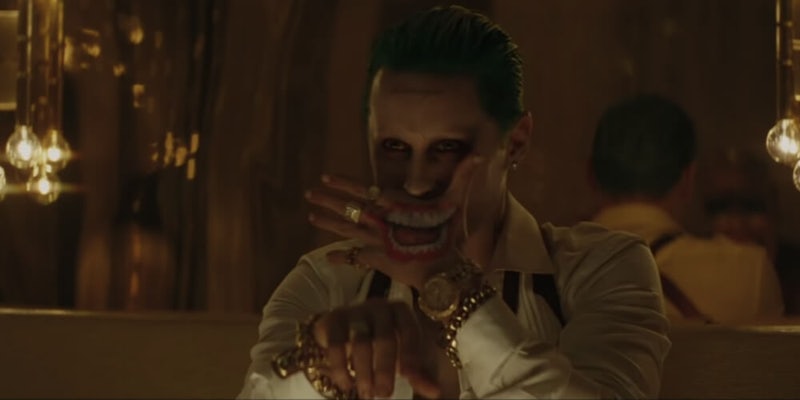 Jared Leto’s obsession with playing notorious Batman supervillain the Joker has been well-documented. As has the psychotic behavior his castmates were subjected to when he decided he needed to truly become the Joker on set. So it comes as no surprise that he was less than thrilled when it was decided someone else would also be taking on the role in a standalone movie.

But according to the Hollywood Reporter, Leto may have gone so far as to try to get Todd Phillips and Joaquin Phoenix’s Joker stopped from the start.

He reportedly complained to his talent agents, who also happen to represent Phillips, about the movie and asked his music manager, Irving Azoff, to call the higher-ups at Warner Bros. and kill the film.

Azoff and Leto no longer work together, and Azoff declined to comment to the Hollywood Reporter. A source close to Leto denied the accusations.

The 30 Seconds to Mars frontman had spoken diplomatically about the project in the past, noting that even though he loves the character, “it’s a big universe and when you play the Joker, there’s no ownership there.” But even that well thought out remark was taken with skepticism by anyone who had been paying attention to Leto’s rollercoaster of emotions leading up to and following the release of Suicide Squad in 2015 and 2016.

The Daily Dot previously documented Leto’s long road of drumming up publicity for the DC ensemble film at length, a film in which he ultimately only ended up appearing in as the Joker for around 10 minutes. The Hollywood Reporter suggested that Suicide Squad director David Ayer was unhappy with Leto’s performance. Ayer has since denied the claim.

“That is inaccurate information. Not my words or actions,” Ayer wrote in response to a fan who questioned him about the reports.

That is inaccurate information. Not my words or actions. https://t.co/1jBRB4Sqvp

Nevertheless, that 10 minutes was enough for many to declare him the worst Joker of the bunch.

Leto subsequently complained that a bunch of his footage had been cut, switched his narrative to claim that he had been “tricked” into the film, and was vocal about not having watched the final movie himself.

And yet, he still wanted Warner Bros. to give him his own standalone Joker film, so much so that he might have been willing to try to sabotage another one simply because he wasn’t in it.

While at one point it seemed possible, if not likely, for Leto to get his wish and showcase his abusive Hot Topic maniac for more than 10 minutes of critically panned screentime, it seems unlikely now. Phillips’ dark take on Arthur Fleck’s origin story far exceeded original expectations at the box office, and to follow it up with one starring Leto would probably see diminishing returns.