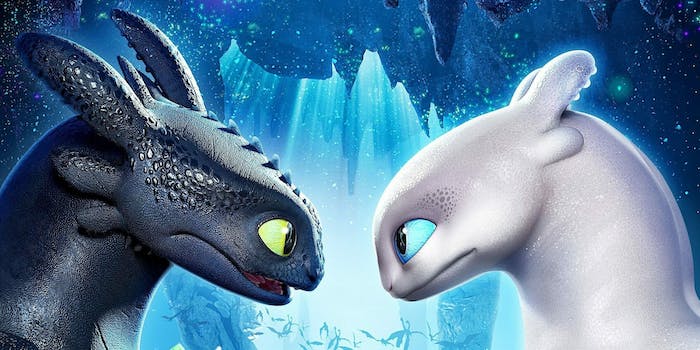 How to Train Your Dragon: The Hidden World/Dreamworks

Is the new female dragon in ‘How to Train Your Dragon’ sexist?

The new dragon illustrates a sexist trend in children's animation.

The How to Train Your Dragon franchise generally earns critical acclaim, but the new trailer introduced a rare flaw: a sexist—or at the very least lazy—design for the new dragon.

How to Train Your Dragon is a heartwarming fantasy about a Viking teen called Hiccup, who comes from a village of dragon slayers. When he shoots down his first dragon, a deadly Night Fury, he can’t bring himself to kill it. Instead, he names the dragon Toothless, and they become best friends. Hiccup and Toothless, who looks like an adorable cross between a black cat and a newt, teach the other Vikings to live side-by-side with dragons as allies, leading to a series of adventures with classic children’s movie themes like teamwork and self-acceptance.

That brings us to the new trailer for How to Train Your Dragon: The Hidden World, which introduces a love interest for Toothless. Nicknamed the Light Fury, she’s a white, feminine version of him.

The Light Fury basically looks like a reverse image of Toothless, with smooth white skin, blue eyes, and smaller horns. (Or tendrils, or whatever those things on its head are.) It’s not an intrinsically bad design, but it plays into a trend for lowkey sexism in animated movies. In a franchise like HTTYD, which is full of wacky-looking monsters, Dreamworks imagined its first female lead dragon as, “What if Toothless, but prettier?”

When people complain about unrealistic beauty standards for women on film, it’s easy to understand why. Likewise, you can see why some parents object to Barbie’s unrealistic physique. In recent years we’ve seen this criticism spread to animated movies, especially the female leads at Disney and Pixar.

In 2015, the blog Above Average pointed out that Disney Princesses literally have eyes bigger than their stomachs, all featuring giant eyes and tiny waists. The sisters from Frozen and Rapunzel from Tangled look so similar, they’re only distinguishable by hairstyle. This felt particularly awkward when Frozen’s head of animation described female characters as “really, really difficult” to animate. Meanwhile, you see a much wider range of physiques for men, even among the handsome heroes. Male protagonists can be dweeby or hunky or goofy, while girls follow a narrow range of body types.

Just look at Brave, which was celebrated for its strong female lead. There are three women in the main cast: Merida (who is cute and slim), her mom (who is cute and slim), and the witch (who is, of course, an old crone.) The men are much more distinctive, with bizarre hairstyles, extreme body shapes, and ugly faces. Even in a fantasy cartoon, women are restricted by a kind of enforced prettiness.

How to Train Your Dragon faces similar issues with its human characters, but we’re not here to talk about them. We’re here to talk about sexual dimorphism, the quasi-scientific explanation for why even cartoon animals face sexist beauty standards.

Sexual dimorphism is the term for visible differences between male and female animals. Common examples include lions and peacocks, where you can instantly differentiate between sexes. Some of these natural differences play into the human idea of gender roles, while others don’t. For instance, female spiders can be much larger and stronger than males.

In animation and video game design, artists often exaggerate a fictionalized idea of sexual dimorphism. You’ll see this everywhere from World of Warcraft (where female trolls are slim and humanoid while males are hulking beasts) to kids’ cartoons. If you look at animated movies about animals, you’ll often notice that female characters have more human-like features. While the boys look like caricatures of actual animals, the girls have fluttering eyelashes and human hairstyles. At the extreme end of the scale, you see characters like Lola Bunny from Looney Tunes, who is basically a pin-up.

The Light Fury in How to Train Your Dragon: The Hidden World is controversial because it’s basically the dragon equivalent of a Pixar Princess design. She’s smooth-skinned and pretty, lacking the texture of Toothless’s scaly skin—and with fewer distinguishing features than other dragons. In HTTYD fandom, there’s an internal debate between people who enjoy the design and think this is a lot of fuss over nothing, and people who think the Light Fury is tantamount to putting mascara on a cartoon dog.

critisizing and understanding somethin doesnt mean you have to hate it

Some fans decided to illustrate how the Light Fury could be improved, like this piece from Tumblr artist kokichi-owoma. Instead of going the “girl version of a male character” route, it takes inspiration from the Light Fury’s aquatic origins. It looks a lot more interesting than the movie version while still being adorable and visually similar to Toothless.

Perhaps the best part of all this is that it hasn’t dissolved into an asinine flamewar. Fans are arguing about the gendered subtext of animated dragons, which is admittedly the definition of a niché interest. But so far, no one is boycotting anything and everyone seems excited about the movie. The Light Fury debate is more of an educational moment about character design, helping us to spot these trends in other movies.