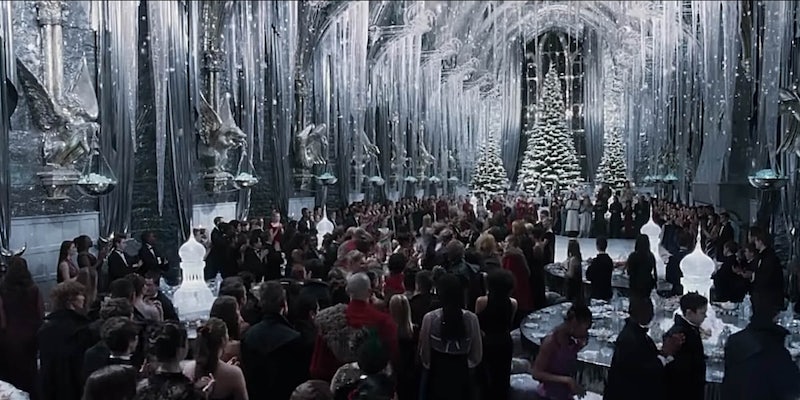 These ‘wizards’ love ‘Harry Potter’ so much, they attend a real-life Yule Ball

Every year for the past decade, 'Harry Potter' fans have gathered for an actual Yule Ball. We got to attend the 10-year anniversary of this fandom tradition.

Adorned with lawn decorations, the stage looks like the outside of a Boston row house mixed with the hallowed halls of Hogwarts. A line of Christmas tree lights snakes its way around the drum kit, and another is draped along the stage’s frame. Backstage, the energy is more frantic. People are running through their sets, eating and chatting. It’s exciting. It’s the Yule Ball.

The name refers to the Christmastime dance held for students in the Harry Potter novels but, on Dec. 14, the party is in Brooklyn. The Bell House bar staff are hardly house elves, but the five acts set to perform—The Dead Ringers, Ashley Hamel, Draco and the Malfoys, the Potter Puppet Pals, and Harry and the Potters—work in tandem to make the magic happen behind the scenes.

At the show’s center are headlining brothers Joe and Paul DeGeorge. They play as Harry and the Potters, a punk concept band where both Joe and Paul perform from the perspective of Harry—Joe as Harry in Year 4, and Paul as Harry in Year 7. Paul initially came up with the idea, and the two brothers started the band in Massachusetts when Paul was out of college and Joe was still in high school.

“Our whole career is ‘what’s the dumb joke that you can make real?’” Paul tells the Daily Dot as he sits to chat before the show. “I like the sort of anti-authoritarian thread of Harry and his friends at school and I thought they could form a cool punk band.”

“[Harry and friends] were always solving problems on their own and doing things themselves, so it aligned with the ethics that we had seen in DIY punk communities,” Joe says.

Harry and the Potters caught the wave of the then-nascent online Harry Potter fandom. The band quickly grew from playing libraries and local venues around Boston to being able to tour more widely. Thirteen years later, the Potters released their latest album, Lumos, which was inspired by the last book in the Harry Potter series. Despite the fact that both DeGeorge brothers could now both be called elder millennials, they and their fandom have remained largely unchanged.

Eight-year-old Hufflepuff Lucy Hamilton and her 7-year-old Gryffindor friend, Parker, show up to the Yule Ball in their very first Hogwarts robes, Hamilton’s parents in tow. They fit into the crowd just as much as the undercut-sporting adults who will rock out tonight and go back to their jobs Monday morning. When the doors open, the median age in the room appears to be about 28.

“It’s kind of been that same age range,” Joe says. “It’s just been newer people as time goes on, coming in.”

The brothers anticipate 450 people total at the Yule Ball. It’s their 10th time doing the annual concert and, according to Paul, it’s more of a homecoming to an audience of fans and friends.

“We’ll see a lot of familiar faces tonight,” Paul says. “There definitely is a solid core who come just about every year, and that will probably be like one to two hundred people—close to half the crowd. The rest are going to be much more casual fans … who are like, ‘this seems like a cool thing to do. I love Harry Potter. I want to get dressed up. I want to drink a Butterbeer.’”

Costumes are very much welcome at the Yule Ball. Madd Todd and Jude Shimer, both in their 30s, show up that night in tuxes the likes of those from Beetlejuice. The couple says they bonded over their love of Harry and the Potters on their first date, and they went to Todd’s first Potters concert on their third. Tonight on their “one millionth date,” according to a swooning Todd, the couple will be seeing the band play again.

“I just feel like my tiny, teen heart is very happy, and it’s nice to see that the community is alive and well and overflowing,” Shimer says.

Thirty-two-year-old Leah Cornish, who is at the show with 29-year-old Aliza Weinberger, has loved the Potters since 2007 and enjoys celebrating the holidays with other “wizards,” or diehard Potter fans. She says wizards as a whole are “kind and accepting and warm.”

“As long as you’re not hurting anyone,” Weinberger clarifies. “I’ve also never seen a group that’s so good at protecting its own from negative. If you get a hint of someone being, like, a jerk and they’re gone. They’re out just by, like, mutual consensus. I’ve never felt safer in a group of people.”

The community has especially had to adapt this protective mindset when dealing with the trickier aspects of the Potterverse—namely, the books’ author, J.K. Rowling. On Dec. 19, Rowling faced a firestorm after tweeting her support of a transphobic British researcher. Rowling’s transphobia sent the Potter fandom, which was already reeling from her many recent controversies, into a tailspin. Cornish, who works for the Harry Potter convention LeakyCon, later condemned Rowling in a Dec. 21 email to the Daily Dot.

“Our trans and [non-binary] friends and family and community deserve so much more than a thoughtless tweet from a woman with more money than god who pretends to know how to write movie screenplays,” Cornish writes. She asserts that the fandom can exist with its own values, outside and different from Rowling’s.

“We’re more creative than her and we’re smarter,” Cornish writes. “We’re kinder. We’re better. She doesn’t speak for us. She hasn’t in a long time. And this proves that she never did.”

On the night of the Yule Ball, Rowling’s ensuing tweet-storm is a week away. Even so, the core of the community’s power is already vibrantly evident. Joe and Paul step on stage, the crowd starts to scream, and 400 wizards raise their wands and pledge to fight evil—a Dumbledore’s Army in the boroughs.