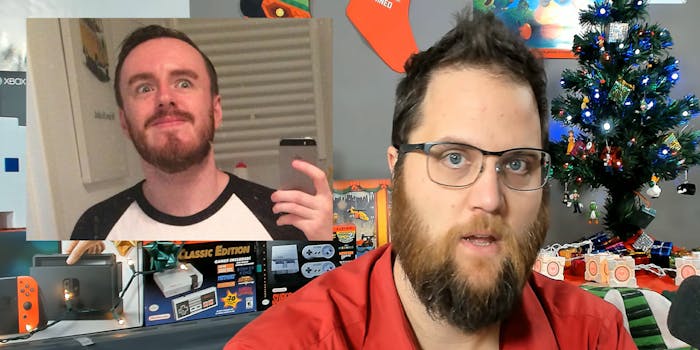 He denies any connection to Gamergate, but his actions raise questions.

Two months after GOG community manager Sean Halliday tweeted a transphobic joke belittling a trans rights hashtag, Halliday revealed that he was fired by the company, according to a new profile from Eurogamer. However, Eurogamer’s report fails to mention that Halliday is working with Jeremy “TheQuartering” Hambly, a right-wing YouTuber, on a new website focused on “all games, no politics.”

For Magic the Gathering players, Hambly’s name is notorious. The YouTuber received a lifetime ban from Magic’s Wizards of the Coast after reportedly harassing cosplayer Christine Sprankle. These days, Hambly creates YouTube videos complaining about “SJW RAGE” and why “incels did nothing wrong.” He also created a gaming website called “Exclusively Games,” dedicated entirely to “fans of gaming who are sick of politics forcing its way inside.”

“I don’t want any infection from politics or modern day ‘journalism’ which is of course just activism parading as games journalism,” the site’s Indiegogo reads. “I got sick and tired of reading the same BS ‘Hot Takes’ from our existing options in terms of ‘video game news’ websites and rather than just complain I have undertaken doing something about it myself.”

Hambly revealed in November that he planned to offer a job to Halliday, letting him “join my team, to help Discord, my social stuff, and work on managing a new community I am working on.” Apparently, that job has now come to fruition. After Eurogamer published its profile on Halliday, Hambly revealed that the former GOG employee is now Exclusively Games’ community manager.

“Ah lets keep the sjw bits and pieces away from here now,” Halliday wrote. “I understand the frustrations with it all but let’s stick the core values we’re aiming for here.”

On Oct. 22, Halliday used GOG’s official Twitter account to tweet “Classic PC games #WontBeErased on our watch,” joking “Yeah, how’s that for some use of hashtags?” The tweet, which has since been deleted, referenced a hashtag created by trans activists amid a Trump administration memo set to erase transgender civil rights protections. GOG later issued a statement on the tweet, stating it was “neither intended as a malicious attack, nor as a comment to the ongoing social debate.”

Yesterday, we posted a tweet containing a trending hashtag as a pun. The tweet was neither intended as a malicious attack, nor as a comment to the ongoing social debate.

GOG should focus only on games. We acknowledge that and we commit to it.

This wasn’t the first time Halliday faced backlash over GOG’s Twitter account. The community manager was previously responsible for a tweet promoting Postal 2 that referenced Gamergate, a harassment campaign targeting games journalists and women in gaming. Halliday stressed in an October interview with the Daily Dot that he was never associated with Gamergate, a point he reiterated to Eurogamer, stating he “prided” himself on “staying out of that whole [Gamergate] discussion for years.”

“I’m certainly of the view there is a discussion to be had about video game press and the industry, but I disagree with how most of the GG crowd handle that—though I can say the same about the very liberal side of the culture too,” Halliday told Eurogamer.

However, it’s unclear if Halliday’s claims are actually true. In 2015, Halliday wrote an article criticizing Anita Sarkeesian and Jonathan McIntosh from Feminist Frequency, claiming the two “are not people who enjoy games, they are people who enjoy power and accolades.” Then in 2016, he criticized Polygon writers for their “cries of sexism, racism, and other social issues.” Those viewpoints fall eerily in line with Gamergate’s beliefs.

Then there’s Halliday’s decision to ban all political discussions from GOG’s forums, vowing instead to remove the “super-right-wingy” and “super-left-wingy” users from the group, as he told Eurogamer. GOG was reportedly “extremely happy with the results,” even though the move essentially equates progressive users with right-wing trolls.

Now there’s Halliday’s new association with Hambly, whose website and videos remain popular with Gamergate, a point Eurogamer missed in its report. That’s particularly troubling, in part because Eurogamer’s report was already panned as “sympathetic.” Halliday’s association with a Gamergate-adjacent site is a glaring omission.

Really proud of your article that's designed to make you feel sympathy for a dude who's job was to be extremely online and clean up the forums to prevent political posts, but somehow didn't know what GG was, and didn't know what hashtags are.

This article is way too soft on the former GOG social media person, especially after Eurogamer found out he lied to them about not knowing what GG was at the time. https://t.co/YCaFIrS5CC

Update 2:40pm CT, Dec. 7: After this article was published, Halliday returned the Daily Dot’s request for comment. Over Twitter DMs, he defended his past writing. When asked to speak on the record about his association with Hambly, he expressed frustration.

“You posted two articles from my past that frame me as Gamergate, you are ignoring a huge volume of posts and interactions that suggest otherwise,” Halliday said. “I feel this is starting to get a bit silly that two posts out of hundreds are being used to frame me as something I am not.”

Update 8:30am CT, Dec. 9: After Eurogamer said Halliday had turned down an offer with Exclusively Games. Hambly confirmed Saturday that Halliday had quit working with him. “Very Sad News. Games Journalists Harassed & Stalked Sean Forcing Him To Quit. Please Share!” he tweeted, along with a link to a YouTube video discussing Halliday and this article.