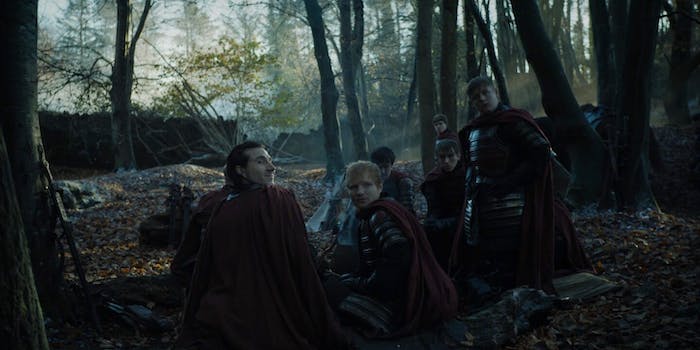 Did you spot singer Ed Sheeran in the ‘Game of Thrones’ season premiere?

There's also an Easter egg hidden in his appearance.

Game of Thrones showrunners David Benioff and D.B. Weiss revealed at SXSW that Ed Sheeran would cameo at some point during the seventh season, and as the season premiere demonstrated, we didn’t have to wait long to see him.

It’s a fitting role for Sheeran. He may be donning Lannister red, but he’s still every bit the musician. As Arya Stark rides by him, he and his fellow soldiers are singing a new song. While Benioff and Weiss tried to throw fans off the trail by suggesting Sheeran was messing around when talking about his role, it turns out Sheeran was right.

Arya compliments Sheeran on his singing and joins the men for a meal after she’s offered food by their fireside. Sheeran doesn’t play much of a role after that and leaves the talking to the other men.

The scene allows Arya to learn what’s happened to King’s Landing since she left—mainly that it’s been destroyed by wildfire—while observing that many of the Lannister men aren’t as black and white as she perceived them to be. Luckily for Arya, when she reveals that she wants to kill Cersei Lannister, they laugh at her. If Arya succeeds, they might be singing a different tune.

Sheeran’s cameo is much bigger than many other musicians’ have been in recent years. Will Champion, the drummer for Coldplay, played a Frey bannerman at the Red Wedding. The members of Mastodon were wildlings at Hardhome. Of Monsters and Men showed up in Braavos. His cameo is more along the lines of Gary Lightbody of Snow Patrol and Sigur Rós, which both featured singing.

What’s interesting about Sheeran’s cameo is that while it’s a new song to Game of Thrones, fans of the books are already familiar. It appears in A Storm of Swords and is sung by Symon Silver Tongue, a singer originally hired to comfort Lollys Stokeworth (who appears briefly in season 5 in a different capacity). Symon attempts to blackmail Tyrion Lannister to get access to Joffrey and Margaery’s wedding. The song, which Symon pledges to sing to Cersei and Tywin Lannister, is about Tyrion and Shae.

“He rode through the streets of the city,

down from his hill on high,

O’er the wynds and the steps and the cobbles,

he rode to a woman’s sigh.

For she was his secret treasure,

she was his shame and his bliss.

And a chain and a keep are nothing,

compared to a woman’s kiss

For hands of gold are always cold, but a woman’s hands are warm…”

Instead of paying him, Tyrion orders Symon killed. And although we don’t have indication that Sheeran is playing Symon, he does sing Symon’s song. Let’s hope that Sheeran’s character meets a better fate than Symon Silver Tongue.