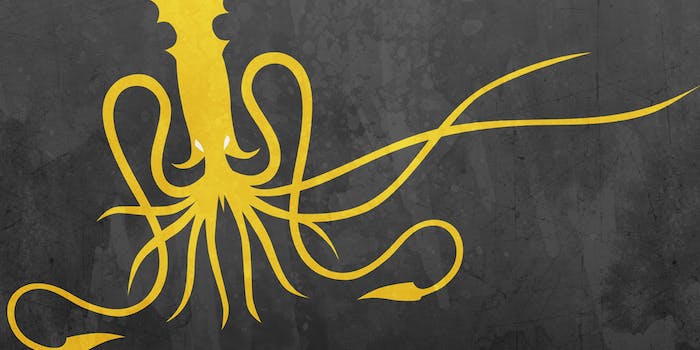 Who are the Greyjoys? Everything you should know about this dysfunctional ‘Game of Thrones’ family

Left on the sidelines last season, the Greyjoys are finally getting their turn in the spotlight.

Game of Thrones has plenty of tricks up its sleeve for its upcoming season, but after five years on the air it’s finally going to release the kraken.

While much has been said about how Game of Thrones is going off-book this season, there are still some book plots that have yet to play out on-screen. For instance, we haven’t seen Samwell Tarly and Gilly’s journey to Oldtown, Jaime Lannister and Brienne of Tarth’s trips into the Riverlands, or Arya Stark’s training with the Faceless Men after becoming blind; Jon Connington, Griff, and Lady Stoneheart have yet to make appearances, although the jury’s still out on whether they ever will. But by far the biggest plotline still lingering from the books is that of the Greyjoys of Pyke—and it’s been a long time coming.

We know Theon Greyjoy of course. He’s been around since season 1, and we’ve witnessed the seasons of torture he’s suffered at the hands of Ramsay Bolton. We know from the trailers that he and Sansa Stark are on the run from Ramsay and his dogs, but not whether he makes it out unscathed; from what we can tell, Sansa will be just fine for now.

And we’ve met Balon and Yara Greyjoy (the latter who’s called Asha in the books but had her name changed for the show so as to not get confused with Osha), Theon’s father and sister, sporadically over the past few seasons. We haven’t seen any of them since Yara’s failed rescue attempt in season 4; Balon’s last appearance was even earlier: In season 3’s “Mhysa” episode when he received Theon’s penis in a box from the Boltons.

Now it’s time to meet the rest of that dysfunctional family. (Click here for a larger version of this graphic.) The Bluths of Westeros

The Greyjoys are outsiders, even within the rulings families of Westeros, and although they don’t have the kind of famous ancestors strewn throughout their history like the Targaryens or the Starks do, their history is often full of failed attempts to make their mark on it. They’ve been largely ignored in the show as it chose to focus on the Martells in Dorne first.

Before Aegon’s Conquest, approximately 300 years before the start of Game of Thrones, the king of the Iron Islands was selected through a kingsmoot, a traditional ceremony used to choose kings. (More on that later.) The Greyjoys had an ancestor or two who was chosen this way, but they were chosen as the ruling family once Aegon I Targaryen quashed the rising chaos.

Sure, the ironborn all bent the knee, but that didn’t mean they were happy about it. Aegon outlawed the Old Way in Westeros, ancient customs in which the ironborn raided nearby cities, carried women away and made them their salt wives, and burned everything to the ground. A desire to return to those pillaging customs sparked a number of their rebellions over the 300 years since, although none of them were very successful. Quellon Greyjoy, Theon and Yara’s grandfather, was an exception to that rule and tried to align the ironborn with Robert Baratheon during Robert’s Rebellion. The effects were short-lived: He was killed during the war, leaving the throne to his eldest surviving son Balon, who started a rebellion of his own just a few years later.

Balon, like his forefathers, wanted to restore the ancient customs. And like the many other rebellions, this one failed too. While his three living brothers—Euron, Victarion, and Aeron—all loyally fought by his side and survived the rebellion, Balon’s two eldest sons, Rodrik and Maron, died during the war. As punishment for the uprising, he was forced to give up Theon, his only remaining son, as a hostage to the Starks.

The death that was foretold… three seasons ago

As previously mentioned, we haven’t seen Balon Greyjoy since the end of season 3. He hasn’t been essential to the interweaving, intricate plots of the past two years, and he was against the idea of Yara rescuing Theon, so it makes sense. In the books, there’s a much simpler reason: He’s long dead by now.

Earlier in the season, Melisandre used blood magic to call for the deaths of the false kings after obtaining it from Robert’s bastard Gendry for her king, Stannis Baratheon. Three names Stannis spoke as she tossed the leeches into the flames: The usurper Robb Stark, the usurper Balon Greyjoy, and the usurper Joffrey Baratheon. Robb died at the Red Wedding and Joffrey at the Purple Wedding, but Balon’s fate has hung in the air ever since. Now, it looks as though the final part of that sacrifice will be fulfilled.

In A Storm of Swords, Balon is the first to die. He falls to his death after he tries crossing a bridge in the middle of a storm in Pyke, and at first glance it looks like a bizarre accident. But many have suspected that Balon was instead killed by an assassin.

Balon’s death, however welcome for fans and Theon sympathizers, presents itself with an entirely new set of problems.

“We shall have no king but from the kingsmoot!”

The biggest problem surrounding Balon’s death isn’t that he’s dead. It’s the matter of which family member will replace him on the Seastone Chair—and for those involved, it’s not as clear-cut as you’d think.

A kingsmoot is an ancient ceremony in which the ironborn select the person they want to see rule them and hasn’t been used since before Aegon’s Conquest. Each candidate names three champions, lays out their plans and promises for their people, and uses gifts to show the people how generous they are. The candidate with the vast majority of support is named king.

With many of the chess pieces already in motion, Aeron Greyjoy, a priest of the Drowned God and Balon’s youngest living brother, calls for a kingsmoot to leave the decision to the people—as well as try to prevent the wrong Greyjoy from getting power. If it goes the same way in the show as it does in the books, it won’t go as planned.

If you go by pure lineage and Westeros’s patriarchal line of succession, who should sit on the Seastone Chair is an easy answer. It’s Theon. But the biggest strike against him is the matter of no longer being able to procreate. Even if he was the next ruler of the Iron Islands, this same problem would occur after his death since he wouldn’t have direct heirs.

Balon points out as much in the show: After receiving Theon’s genitals in a box Balon essentially disowns him, says that Theon “is not a man anymore,” and states that “he cannot further the Greyjoy line” to Yara when she protests the cold treatment towards his only living son.

At this point in the books he’s MIA as a prisoner of the Bolton’s, and while he could still show up for the kingsmoot on the show, he probably doesn’t have a chance.

Balon has groomed Yara to be the son he didn’t have ever since Theon was taken to Winterfell, and in the books she’s Balon’s favorite choice to succeed him. She knows the ironborn, she leads the charge into battle, and commands her own ship. She’s defying the gender roles set for her everyday.

Despite any favor from Balon, her gender is a big issue. “A woman cannot rule the ironborn,” Aeron said about his niece, and as long as the ironborn have been around, a woman never has—and many of them aren’t about to let one start.

Euron Greyjoy, or Crow’s Eye as he’s sometimes referred to as, is the next eldest Greyjoy brother and initially the most likely candidate to rule the Iron Islands. He may have also had something to do with the sudden vacancy.

In the books, Euron is banished from the Iron Islands after he raped one of his younger brother Victarion’s salt wives, which makes his coincidental return one day after Balon’s sudden death all the more suspicious. The standing theory is that Euron, who has vast knowledge of the East from his travels, hired a Faceless Man to assassinate his brother. Hiring the Faceless Men to kill someone for you comes with a lofty price—the more important the person, the more it will cost you. Considering that Balon was one of the Five Kings, some believe Euron paid for it with a dragon egg.

Euron is ruthless, cruel, manipulating, and even a bit mad, but he’s a skilled warrior, which likely appeals to some of the voters. But he’s not a godly man, something that doesn’t sit well with Aeron, who prefers that Victarion become the new ruler.

Perhaps it could also explain the shot of Euron being dunked into water in what looks like a ritual for the Drowned God.

Although we’ve yet to see the scope of the kingsmoot in the show, aside from some footage from the set, Euron is currently the only new Greyjoy officially confirmed to be in Game of Thrones’s upcoming season. He’ll be played by Danish actor Pilou Asbæk.

If you want to get a good idea of what Victarion is like, just go to the person who created him: George R.R. Martin has said that Victarion is “basically a dullard and a brute” and “dumb as a stump.” He’s a religious man and a skilled commander, serving as the Lord Captain of the Iron Fleet, and he was loyal to Balon.

While he may not be as hated as Euron, he’s got a kill list as long as anyone else in Westeros and he’s pretty twisted in his own right in the books. He murdered the salt wive whom Euron raped after she became pregnant in order to retain his honor; he would’ve killed Euron too if kinslaying wasn’t forbidden. At one point he burns a ship full of Lyseni slaves as tributes to the R’hllor and the Drowned God.

Because he’s a religious man, he’s Aeron’s pick for ruler of the Iron Islands. But will we see either of them on the show?

Why are we being introduced to Greyjoy politics this late in the game?

With tensions rising at Castle Black and north of the Wall, Winterfell, King’s Landing, and Meereen, it may seem like an odd choice to head all the way back to the Iron Islands, which we haven’t seen in years, even if it is one of the few book plots Game of Thrones can still adapt for TV. The answer to that may be in the details.

In the books, both Yara and Victarion gain support for their plans to move the Iron Islands forward, but it’s Euron who holds the trump card. He orders one of his men to blow a mysterious dragon horn and tells the kingsmoot that he can bind dragons to do as he wishes. With those dragons—meaning Drogon, Rhaegal, and Viserion—he says he will conquer and make Westeros great again. Of course, he doesn’t mention the effects of blowing the dragon horn; a maester discovered that Cragorn, who died shortly after blowing the horn, had charred black lungs.

If show Euron has that trick up his sleeve, there’s no telling what he might end up accomplishing before Daenerys Targaryen and Drogon return to Meereen.

The Greyjoys do not sow. And boy will the rest of Westeros find out.