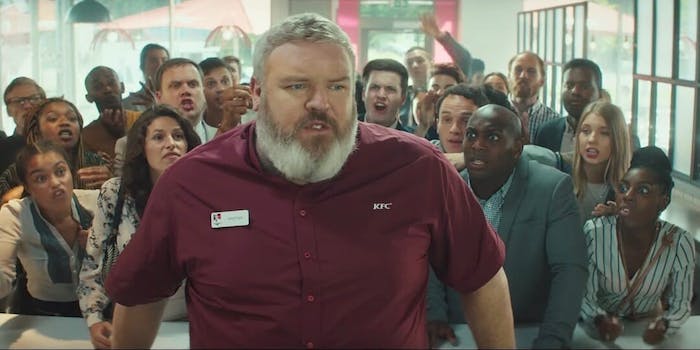 Screengrab via KFC UK and Ireland/YouTube

More than a year after it aired, Game of Thrones fans still aren’t over one of the show’s most heartbreaking deaths, and now it’s been immortalized even further in a new commercial starring the actor behind it.

We’re surprised it took this long, honestly. Hodor’s death—and his cries of “Hold the door” from a younger version of him—inspired memes and actual door stoppers alike in the immediate aftermath. But now Kristian Nairn, the actor who played Hodor since the beginning of the show, is evoking Hodor’s final moments in an ad for KFC. Instead of wights rushing toward him in a cave far north, it’s a bunch of hungry customers on their lunch break.

Don’t worry. It’s perfectly normal to have some strange emotions about a beloved character’s death while watching a commercial for a new product.