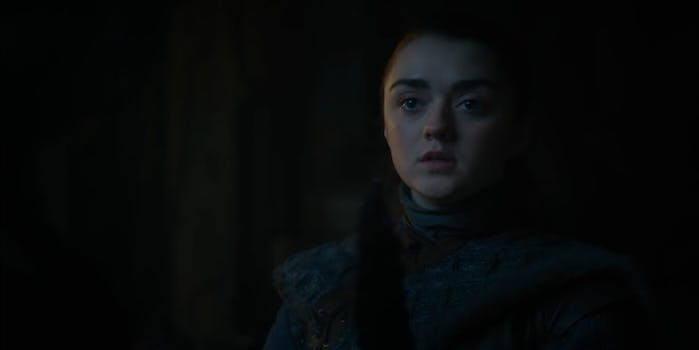 HBO has no plans for an Arya Stark spinoff series

Give the fans what they want!

Shortly after Game of Thrones ended, rumors began swirling of a possible spinoff involving Arya Stark. In fact, many fans were demanding for a sequel starring the young Stark, especially after her final scenes in which she was seen boarding a ship, hoping to see what was west of Westeros.

Just give me Arya Stark spin off pic.twitter.com/KxSx53D7lx

Her open ending left many to wonder if plans had been made for Arya to have her own spinoff, where viewers would follow her journey on the sea. Many even joked that she would ultimately end up discovering America.

arya stark sailed west, found america, and is the great ancestor of tony stark, world saver. I will not hear any other theories besides this one #GameOfThrones

However, HBO Programming President Casey Bloys shut down rumors of a potential sequel in an interview with the Hollywood Reporter, where he stated that not only was Arya Stark not getting a spinoff but that no character from the show is currently under consideration for a sequel.

“No,” he said in the interview. “I don’t want to take characters from this world that [David Beinoff and Dan Weiss] did beautifully and put them off into another world with someone else creating it. I want to let it be the artistic piece they’ve got. That’s one of the reasons why I’m not trying to do the same show over. George [R.R. Martin] has a massive, massive world; there are so many ways in. That’s why we’re trying to do things that feel distinct — and to not try and redo the same show. That’s probably one of the reasons why, right now, a sequel or picking up any of the other characters doesn’t make sense for us.”

After his statements, many fans began to express their disappointment in the decision and in HBO for not giving Arya—arguably one of the most popular characters on the series—her own show.

Since some exec from HBO already put the idea of an Arya Stark spin off to rest, now we know: they really don't give a fuck about what ppl are asking for.

However, despite no planned sequel for the existing characters. There are still other spinoffs of Games of Thrones which have been announced, one of which will be a prequel starring Naomi Watts.

“We’re shooting the pilot in June,” Bloys told the publication. “You can do the math and figure out when it would be on the air.”