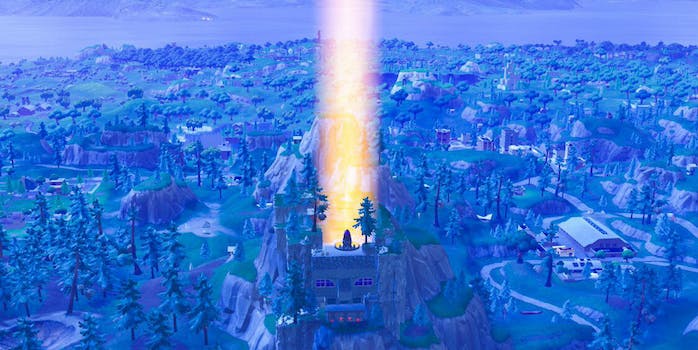 The blink-and-you'll-miss-it event has left a giant crack in the sky.

There’s something beautiful about shared events in game worlds, especially if they’re one-and-done affairs, an experience so unique and momentary it will become the hushed whispers of a few hundred players. “Did you see it? I can’t believe we managed to be there,” they might say.

Gamers now know this only too well after the one-time Fortnite rocket launch that managed to leave a giant celestial scar in the map’s sky on Saturday.

After days of teasing some new event through in-game televisions and sirens, the Fortnite island finally started animating the evil villain lair that was introduced at the start of season 4. What was previously a quiet missile silo now glowed with light.

Players began flooding into the game, causing long queue waits just to get onto a server, causing some players to only barely make it in as the event started.

Eventually, the missile standing upright in the silo began to hum with energy, then rocket off high into the night sky with plumes of smoke and fire belching from its thrusters, creating a beautiful arc through the darkness. The rocket chugged about 1,000 feet in the air before ditching its old thrusters and transitioning to stronger ones, continuing to fly up toward the moon.

Before too long, as the rocket flittered out of view, another spaceship began to fall back to earth like a shooting star. With a red laser beam trained right on the tented area of the map (that contains a meteorite that appeared at the beginning of season 4), the ship crashed directly into the area, dissipating into some sort of reality crack.

The ship continued to warp in and out of our reality, flying at high speed around the map, until a final jump left a giant crack of blue-ish electricity in the sky. And wouldn’t you know it, that part is still there for players to gaze at.

Polygon managed to get a clear shot of the rocket during its launch and subsequent dimension-hopping.

It’s unclear what any of this means for the future of Fortnite’s meta-narrative. Players have previously watched meteorites fall from the sky and secret hero and villain bases get constructed, and there’s no shortage of goofy toys that have been added to the game.

Fortnite’s current season ends July 12, so there’s still plenty of room for them to add on to the mysteries filling up Fortnite’s skies. That the developer committed to a one-time event like this is nothing short of impressive. It’s not like an MMO where the ultimate boss technically has to still be around for other players to eventually beat him. It’s a shared experience among a (relatively) small group of people, and that’s helping Fortnite continue to claim the crown of battle royale games.