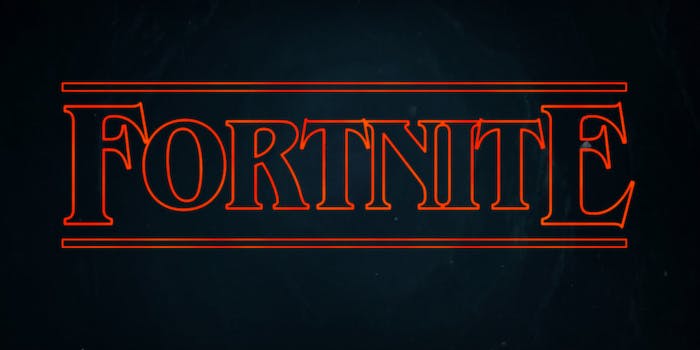 Is a ‘Stranger Things’ and Fortnite crossover event going to happen?

While the world patiently waits for season three of Netflix’s Stranger Things, Fortnite is here to tide us over. A new leak from longtime data miners is leading some to believe that an in-game crossover event between the two will take place.

A new Stranger Things-themed cosmetic set is coming to the game, according to data miner Lucas7Yoshi, who’s been a reliable source for Fortnite leaks in the past

Lucas7Yoshi’s snapshot of the files in question shows a Stranger Things display name, along with a file named “Weird Objects.” Judging from how the files are written, it’s reasonable to assume the updates have already been inserted into the game files and are just waiting for implementation.

FortTory, another longtime Fortnite data miner, managed to find a similarly worded “Weird Objects” file, but this time it was accompanied by an audio file called “Portal_Expand.”

Back in 2018, players discovered a series of portals underneath Wailing Woods, so if Epic is adding additional sound effects to these portals, it’s reasonable to imagine they’ll play a role in this upcoming Stranger Things event. In the Netflix series, a portal between the human world and the “Upside Down” region plays a pivotal role, since that’s where creatures like the Demogorgon dwell.

There’s currently no lead on what the “Weird Objects” file name could relate to, as it doesn’t line up with anything from Stranger Things. It could be a placeholder name of sorts to avoid giving away a surprise that will happen during the crossover event.

All signs point to some sort of crossover event, and that could mean anything from some simple cosmetic add-ons to a full-blown event. Fortnite isn’t above using its platform as a giant advertisement for upcoming attractions, like Marvel’s Avengers: Endgame. For what it’s worth, Netflix confirmed a while back that Stranger Things season 3 would be released on July 4, so you should expect to see this crossover event happen soon if everything is as our data mining sources say.