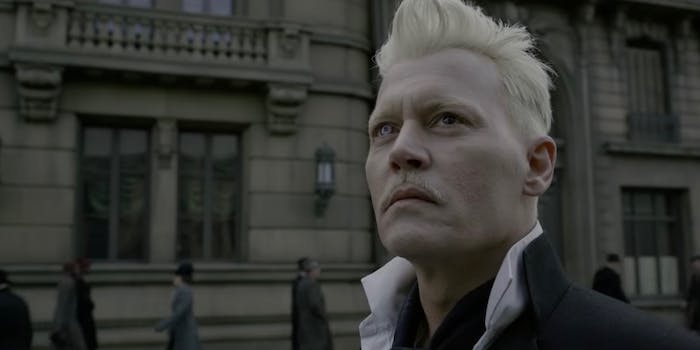 The interview is unlikely to change many people's minds.

The backlash against casting Johnny Depp as Gellert Grindelwald—the big bad of the Fantastic Beasts franchise—by a portion of Harry Potter fans has been a constant presence any time Depp’s name has come up for close to two years. As the release date for Fantastic Beasts: The Crimes of Grindelwald inches closer, Depp is speaking out about the role (and the ensuing backlash against him) for the first time. And well, whatever your feelings on Depp were before, this probably won’t change your mind.

Depp spoke to Entertainment Weekly as part of the magazine’s cover story on The Crimes of Grindelwald. The character first made a cameo appearance in Fantastic Beasts and Where to Find Them, but he now has a much bigger role (including being the sequel’s titular character). But every time a piece of Fantastic Beasts news drops or an update on Depp drops, the arguments against Depp resurface. Fans have wanted Depp recast almost since the beginning after his ex-wife, actress Amber Heard, said that Depp physically abused her (and even got a restraining order against him from a judge after she came forward with details of that abuse), and some fans have vowed to boycott the film because Depp is in it.

Depp addressed his presence in the film toward the end of the interview. He pointed to author and The Crimes of Grindelwald screenwriter J.K. Rowling’s public support of him (and bemoaned the backlash she received for supporting him); director David Yates and Warner Bros. have also publicly supported him. (One unnamed costar also described Depp as “totally sweet and professional.”) But the real issue, according to Depp, was that he was being falsely accused and that he had evidence to prove it.

I’ll be honest with you, I felt bad for J.K. having to field all these various feelings from people out there. I felt bad that she had to take that. But ultimately, there is real controversy. The fact remains I was falsely accused, which is why I’m suing the Sun newspaper for defamation for repeating false accusations. J.K. has seen the evidence and therefore knows I was falsely accused, and that’s why she has publicly supported me. She doesn’t take things lightly. She would not stand up if she didn’t know the truth. So that’s really it.

Depp also believes that his loyalty to Rowling, Yates, and the amount of respect that fans have given to Fantastic Beasts’ source material is enough to reassure fans. In reality, it likely won’t change a thing: people who supported Depp may feel vindicated while those who wanted Depp out will see Depp using the major platform in which he’s promoting a new movie to call his ex-wife a liar.

When Depp and Heard finalized their divorced in 2016, they released a joint statement that stated, in part, that “Neither party has lied nor made false accusations for financial gain.” In this new interview, Depp is now insinuating that he never abused Heard and is even suing The Sun for a report on Rowling’s support of him. (U.K. libel lawsuits put the burden of proof on the defendant, whereas the U.S. which puts that on the plaintiff.)

“As the parties agreed in their divorce to resolve future disputes in confidential arbitration, that is the appropriate forum to address Mr. Depp’s public denials that he abused Ms. Heard,” Heard’s attorney told Entertainment Weekly in response to Depp’s interview.

The decision for Warner Bros., Yates, and Rowling to not only keep Depp but publicly support him has continued to baffle fans. The move was seen as even more troubling in the wake of the investigation into Harvey Weinstein last year that only scratched the surface into an industry where abuse, sexual harassment, and sexual assault were systemic—and that, more often than not, Hollywood would rather protect a man’s career than believe women.

It’s possible that Depp may bring an impressive performance to The Crimes of Grindelwald; he’s going to have a much bigger role than he did in the first film. But in terms of how the film is perceived by some fans and critics, that won’t matter. The allegations against Depp—who is playing a character who abuses and manipulates others—will continue to cast a shadow over the Fantastic Beasts franchise no matter how good he may end up being in it.