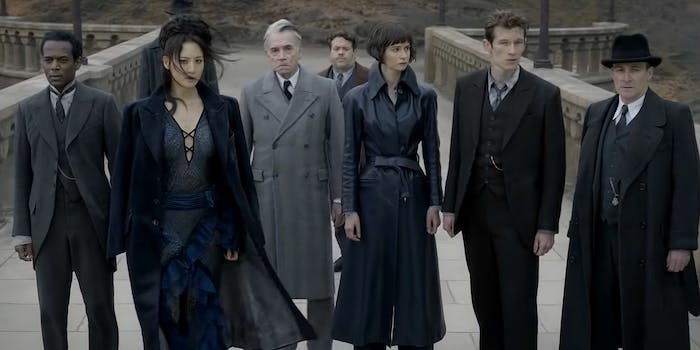 The end of ‘Fantastic Beasts: The Crimes of Grindelwald,’ explained

What does that bombshell mean for the next movie?

Warning: This article contains major spoilers for Fantastic Beasts: The Crimes of Grindelwald.

After more than an hour of setup and a return to Hogwarts, Fantastic Beasts: The Crimes of Grindelwald comes to a head in a fiery and consequential battle. And while some of our heroes emerge physically unscathed, that doesn’t mean there aren’t plenty of questions still lingering.

To put it lightly, a lot happened in the film’s final act. One character dropped a major bombshell. There are betrayals, impressive feats of magic, and death. And to top it all off, the last-minute revelation of family ties left fans reeling—both those who liked and hated the movie.

The Crimes of Grindelwald is doing plenty of setup for the third, as-of-yet untitled Fantastic Beasts movie, which is currently set to be released Nov. 20, 2020. That gives fans just over two years to theorize their hearts out. But for those left with some whiplash, it’s always good to take a step back to examine what we just saw.

The final scene of The Crimes of Grindelwald takes place at Nurmengard, Gellert Grindelwald’s stronghold in Austria that will, in a couple decades, become his prison. He’s reasonably comfortable and on top of his game, and although he had been harsh and manipulative in some of their earlier interactions, he takes a kinder (albeit still manipulative) approach to Credence Barebone—a powerful Obscurial, or someone who was made to repress their magic as a child to the point that their magic could cause destruction—at the insistence of Queenie Goldstein.

Earlier in the movie, Grindelwald said that Credence was the only person who could kill Dumbledore, and to help set that plan in motion, Grindelwald has to carefully drop several bombshells.

“You have suffered the most heinous of betrayals, most purposely bestowed upon you by your own blood,” Grindelwald said. “Your own flesh and blood. And just as he has celebrated your torment, your brother seeks to destroy you.”

First, Grindelwald presents a small and sickly bird is presented to Credence, noting that there’s a family legend in which a phoenix can appear “to any member who is in dire need.” He tells Credence that his name is Aurelius Dumbledore.

Credence is given a wand, and now that he can channel his magic with the wand, he’s able to cause part of a nearby mountain to break.

The credits roll after that, leaving us with plenty of questions.

Who is Credence Barebone?

When we look back at the reveal that Credence is a Dumbledore, it seems a bit suspicious. Are we really supposed to take Grindelwald at his word?

To be fair, Grindelwald is a known liar and bends the truth to get people to join his side, so it’s natural to be suspicious. But there’s another piece of evidence that would be much harder for him to fake (although it’s certainly not out of the realm of possibility): the appearance of the phoenix at Nurmengard Castle, which Albus Dumbledore previously said comes to the Dumbledore family in times of great need; it’s unclear if the phoenix is series regular Fawkes or an unnamed phoenix.

Aurelius is also a curious choice, one befitting with some of the other Dumbledore children (and not just because it also starts with the letter A). “Albus” comes from the Latin word for “white,” one origin of the name “Ariana” comes from the Welsh word for “silver,” and Aurelius comes from a Latin word for “golden, gilded.” Out of the potential Dumbledore siblings, Aberforth—whose name is Gaelic and means “from the river”—is the black sheep of the family.

But there’s a snag in the reveal. If Credence is Dumbledore’s brother, how on earth did it happen?

Albus Dumbledore was born in 1881, making him around 45 or 46 during The Crimes of Grindelwald. According to the Crimes of Grindelwald screenplay, Credence was an infant in 1901—the same year that Leta Lestrange swapped him for her baby brother Corvus for a moment of reprieve. Depending exactly when he was born, that would make Credence 25 or 26 during the film (which ages the character up by several years from Ezra Miller’s original estimate of Credence’s age). Granted, there’s a sizable age difference between Dumbledore and Credence, but it’s not necessarily out of the ordinary.

And by the time Grindelwald met Dumbledore in the summer of 1899, both of Dumbledore’s parents were dead (or at least one of them was locked away). His father Percival had been imprisoned several years earlier for attacking the Muggle boys who had attacked Dumbledore’s younger sister Ariana, who was left scarred and wasn’t able to control her magic; it’s unclear exactly when he died. His mother Kendra had died in 1899 as a result of Ariana losing control. And if Miller’s assessment of Credence’s age were correct, he wouldn’t have been born until nearly a decade later.

It’s possible there was a secret child if an imprisoned Percival Dumbledore was still alive and was able to father one. On the other hand, the Dumbledore connection could be more loosely based; Credence might be a Dumbledore, but something like a cousin instead of a brother. For what it’s worth, Credence’s aunt, who isn’t given a name, does briefly appear in the film as she takes baby Corvus (thinking the baby is Credence) to the lifeboats and attempts to save him when he ends up in the water.

Grindelwald wants to turn one Dumbledore against another and have Credence kill Albus since Grindelwald can’t do it himself. And worst-case scenario, Dumbledore and Credence kill each other so then there are two fewer powerful magical beings who can kill him. But given that Dumbledore makes it to the Harry Potter series, we know that won’t happen.

Credence spends much of the film trying to track down his family, and some believe that he’s “the last of an important French line, a baby whom everyone thought lost.” He discovers Irma Dugard, the half-elf woman listed on his adoption papers, but she’s soon killed. Eventually, Credence is led to believe that he’s actually Corvus Lestrange, the long-lost half-brother of Leta, by Yusuf Kama, who is attempting to kill him. But in reality, that Corvus has been long dead.

As Leta revealed soon after, she and Irma were sent to the U.S. with baby Corvus when she was young, and at one point, Leta swapped her brother with another baby because Corvus wouldn’t stop crying. Shortly after, the ship sank, and while Leta, the baby, and Irma all survived, baby Corvus drowned. That baby—heavily inferred to be Credence—was eventually adopted by the cruel No-Maj Mary Lou Barebone.

The reveal is muddled and ultimately a red herring as it might apply to Credence. (It also contains even more of the kind of tone-deaf storytelling that’s rampant throughout the Fantastic Beasts franchise after it revealed that Leta Lestrange’s father, also named Corvus, placed an Imperius Curse—which places someone under another person’s control—on Laurena Kama, a Black woman from a pureblood Senegalese family, and forced her to marry him. It’s implied that he raped her and she eventually died in childbirth.)

And then there’s the matter of the prophecy that looms over the film. Torquil Travers, the head of the Department of Magical Law Enforcement, first brings up the prophecy, which appeared in The Predictions of Tycho Dodonus, to Dumbledore at Hogwarts, but Dumbledore cuts Travers off before he can finish. Travers believes it might refer to Credence and that Grindelwald is courting Credence. Yusuf Kuma, who was tasked by his father to murder the person that Corvus Lestrange loved most in revenge for what happened to Laurena, later recites it.

Despair of the daughter

With winds from the water.”

Yusuf believes that Credence is the banished son, Leta is the daughter in despair, and he is the great avenger. Leta soon dispelled him of that notion; baby Corvus died in the Atlantic Ocean. If the “Credence is a Dumbledore” reveal holds water in future films, the prophecy could easily be about the Dumbledore family instead of the Lestranges.

What does that mean for the next Fantastic Beasts?

The Crimes of Grindelwald has been criticized for being a film that’s largely set up for the next movie, and that’s not inaccurate. Much of the film moves the characters from one place to another and has them preparing for the next battle.

Newt Scamander has made his choice. Once preferring to be neutral, he’s chosen a side—the same one that Dumbledore and his brother fight on—after he witnessed Grindelwald murder Leta. Dumbledore now has the vial of blood that symbolizes the blood pact he made with Grindelwald as a teenager vowing not to kill the other after Newt’s Niffler nabbed it off Grindelwald. Dumbledore now has to figure out how to break it before he can personally move forward. Nagini hasn’t made her personal motivations clear, but she’s with the Scamander brothers. A similar split exists between Jacob Kowalski and Queenie Goldstein, the latter choosing Grindelwald.

As for how it all plays out? It’s too early to tell. But chances are there’s much more mischief, heartbreak, and destruction to be had before Dumbledore defeats Grindelwald in 1945 (and presumably the fifth and final film in the franchise). After all, a war is brewing in the Wizarding World—and not everyone will make it out alive.