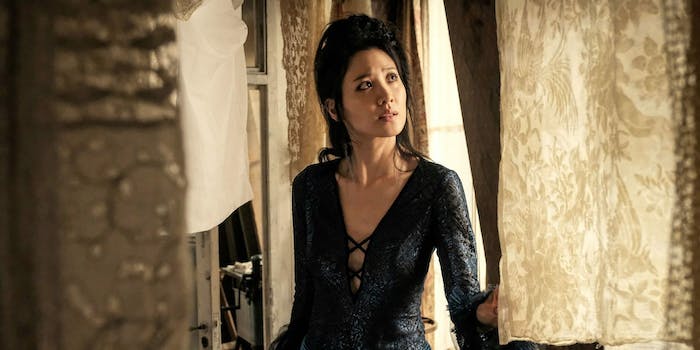 ‘Fantastic Beasts: The Crimes of Grindelwald’ fails its female characters

The roles for women of color were particularly bad.

Warning: This post includes spoilers for Fantastic Beasts: The Crimes of Grindelwald.

Considering the depth of characterization in the Harry Potter books, it’s dismaying to watch The Crimes of Grindelwald and realize how thinly written its female characters are. In particular, the women of color got a very raw deal.

Fantastic Beasts and Where to Find Them introduced our first two female leads, the Goldstein sisters. Tina is an American Auror and Newt Scamander’s love interest, while her sister Queenie is a mind-reading legilimens whose main characteristic is ditziness. In the new movie, both sisters’ roles revolve around the men in their lives—much like our new female lead Leta Lestrange (Zoë Kravitz), Newt’s high school sweetheart. The Crimes of Grindelwald may include three (arguably four) female leads in its ensemble cast, but their roles are riddled with sexist and racist themes. Let’s take a look.

The problematic women of Fantastic Beasts: The Crimes of Grindelwald

Queenie is passionately in love with her muggle boyfriend Jacob, flouting the law against wizard/muggle relationships. Their first scene reveals that Queenie has enchanted Jacob into lovestruck obedience, planning to marry him without his consent. (When he’s in his right mind, he says that marriage is too risky.) Newt makes her remove the spell, leading to an inevitable argument between Jacob and Queenie. Jacob then spends the rest of the movie trying to mend this blatantly unhealthy relationship. It’s a strange echo of something we saw in Harry Potter and the Cursed Child, which failed to acknowledge that love potions are essentially date rape drugs. Queenie’s unethical behavior foreshadows her later decision to join Grindelwald, which is seemingly meant to illustrate how fascist leaders prey on vulnerable people.

After just one brief conversation with Grindelwald, Queenie decides to join his murderous wizard-supremacist cult. Why? Because he promises to let Queenie marry Jacob once he’s in charge. In theory, this could be an interesting look at why people join racist political movements against their own best interests, but the film is not sophisticated enough to explore that idea. And that’s before we get into the troubling detail of a possibly Jewish character joining Wizard Hitler during a clumsy allegory for the rise of Nazism. Jacob and Queenie’s situation clearly echoes the Nurenberg laws forbidding intermarriage between Jewish and non-Jewish Germans. Yet Rowling decided the best way to explore this was for Queenie to join the allegorical Nazis, framed as a decision born of well-meaning naivety. Since Queenie can read the thoughts of Grindelwald’s other followers, this is very hard to swallow. She can’t possibly ignore their violently bigoted attitude toward muggles.

Tina’s entire role in The Crimes of Grindelwald is to provide motivation for Newt, mostly thanks to a flimsy love-triangle.

While Newt initially refuses to search for Credence Barebone in Paris, he agrees once he learns that Tina is in town. He’s desperate to see her again, hoping to resolve a ridiculous misunderstanding: Thanks to a newspaper misprint, Tina thinks Newt is marrying Leta LeStrange, when actually Leta is marrying his brother Theseus. Newt finally explains the truth and they get a very sweet reunion scene, but Tina’s role is much more passive than the male characters, who all get storylines of their own.

J.K. Rowling has received a lot of criticism for the lack of racial diversity in Harry Potter, with nonwhite characters usually relegated to supporting roles. The Crimes of Grindelwald is the first to have a woman of color as one of the leads, with Leta Lestrange at the epicenter of a complicated plot involving Credence Barebone’s heritage.

Enigmatic and troubled, Leta was an outcast at Hogwarts, and we know that she and Newt had romantic feelings for each other. Yet now, she’s engaged to his brother Theseus. Why? Well, we don’t know. Maybe we’ll find out in later movies, but this film never explains how she and Theseus fell in love—or if they’re actually in love at all. And then at the end of the movie, Leta dies, sacrificing herself to save the Scamander brothers. The film kills off Harry Potter’s first Black female lead, shortly after revealing her tragic past: Her evil white father kidnapped and raped her Senegalese mother using the Imperius curse, kickstarting a family feud. This tale of unpunished horror is incredibly dark for a film that mostly follows a light adventure-comedy tone, and it’s basically a footnote in the journey to discovering Credence Barebone’s true backstory.

Nagini’s role was a bombshell for Harry Potter fans, continuing J.K. Rowling’s controversial hobby of rewriting Wizarding World canon. This one was a doozy, revealing that Voldemort’s pet snake Nagini was secretly a woman all along—a (probably) Indonesian woman with a blood curse that gradually transforms her into a snake. We meet her in a freak show in Paris, where she acts as emotional support for Credence Barebone.

This role already sounded dubious when Warner Bros. revealed it in September. A mysterious Asian woman who tragically turns into a monster? Who first appears as a circus freak chained up in a cage, and ends up killing and eating humans on Voldemort’s orders? It all sounded potentially racist, but I was prepared for The Crimes of Grindelwald to flesh out her role into something more complex.

It didn’t. The movie never expands on what we learned from the promotional interviews, and she doesn’t even pass the sexy lamp test (ie. “could you replace this female character with a lamp?”). Nagini mostly just stands in the background of Credence’s scenes, a loyal companion who barely has any dialogue or story of her own. Adding insult to injury, her costume throughout the movie is the same low-cut evening gown she had to wear at the circus.

When you compare Nagini and Leta’s roles to the Goldstein sisters, there’s a clear difference. The white women struggle with romantic and political problems, while the women of color are lonely figures beset by suffering and dehumanization. Their stories are peppered with racist tropes, and they don’t find love like Tina and Queenie. They’re even styled differently, with Nagini and Leta both wearing slinky femme fatale dresses while the Goldstein sisters (and most other witches) wear suits and overcoats.