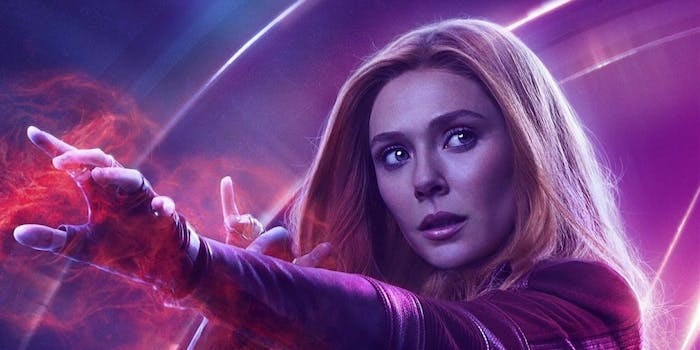 Elizabeth Olsen thought her ‘Avengers’ costume was too revealing

'I think of the costumes and what we have to wear—it’s more about iconic images, because that's what these movies are.'

Superhero movies have made big costume improvements for female characters compared to some of their comic book origins, but as Elizabeth Olsen points out, there’s always room for improvement.

Ahead of Avengers: Infinity War arriving in theaters, Olsen—who’s played the Scarlet Witch since Avengers: Age of Ultron—talked with Elle about what she would change about the superhero costume her character wears in the movie.

“It would just not be a cleavage corset. I like corsets, but I’d like it to be higher,” Olsen told Elle. “Everyone has these things that cover them—Tessa Thompson does, Scarlett [Johansson] does. I would like to cover up a bit. It’s funny because sometimes I look around and I’m just like—wow, I’m the only one who has cleavage, and that’s a constant joke because they haven’t really evolved my superhero costume that much.”

Female superhero costumes have been scrutinized by fans and critics alike for almost as long as the modern-day Marvel Cinematic Universe has been around. Some of those costumes, such as the suits worn by Black Widow in earlier films, were once the main focus of some critics’ reviews of Black Widow in films like Captain America: The Winter Soldier, but the suits have evolved over the years. Other heroes, such as Gamora in Guardians of the Galaxy, wore outfits without cleavage. The armor that Nakia, Shuri, and the Dora Milaje in Black Panther wore focused more on protection than any kind of male gaze, whereas Valkyrie’s armor (both as a bounty hunter and when she put the Valkyrie uniform back on) was more about functionality.

Scarlet Witch’s costume has some of that functionality after Age of Ultron—for instance, she now fights in pants versus a dress—but the corset gives her a more revealing costume than many of the heroes she fights alongside in Infinity War.

Olsen is well aware of what the Scarlet Witch wore in the comics when the character was first introduced.

“But then you look at where it started in the comic books and it was a leotard and a headband so…oh, it’s horrible, it’s so horrible. So at least they know that’s not cool. But then they made Wonder Woman, you know? And that’s what she’s in. I think of the costumes and what we have to wear—it’s more about iconic images, because that’s what these movies are…. I think that’s the goal with the costumes, and it’s not representing the average woman.”

Although Wonder Woman’s costume and the outfits worn by her fellow Amazonian warriors in the DC films are shorter and more revealing than what many of their male counterparts wear, they’re seen as empowering. That perception is largely thanks to the historical inspiration and care in designing them, and how director Patty Jenkins filmed Gal Gadot and the other women who played Amazons without gratuitous leering. The way Gadot is filmed in Justice League, meanwhile, drew massive criticism.

It isn’t just what a superhero is wearing, but how she’s filmed wearing it.