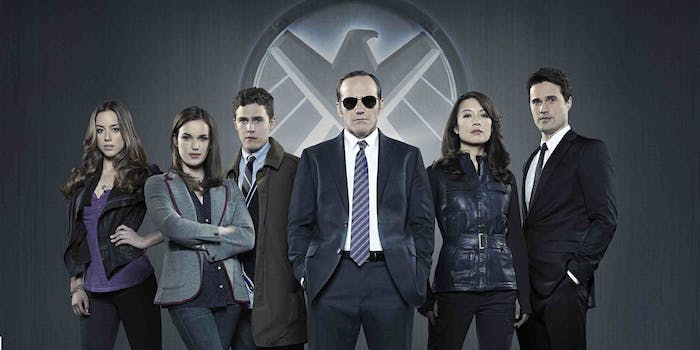 Photo via Agents of SHIELD/ABC

Did Disney pressure ABC to renew ‘Agents of S.H.I.E.L.D.’?

Will Disney do the same thing for 'Inhumans'?

Disney told ABC to renew Agents of S.H.I.E.L.D. despite disappointing ratings, according to a new report from Variety.

The report covers ABC’s poor ratings across the board, but it’s particularly interesting in the context of Marvel shows. Inhumans earned astoundingly bad reviews during its IMAX preview release, and is expected to be unpopular when it premieres on ABC this Friday.

Agents of S.H.I.E.L.D. was Marvel Studios‘ first foray into TV, with strong ties to the movie franchise and an introductory episode by Joss Whedon. Season 1 benefited from a crossover with Captain America: The Winter Soldier, but recent seasons felt detached from the movies—and completely alien to the more high-profile Netflix franchise. Season 4 had low ratings, and Variety reports that “the mandate came down from Disney for ABC to renew,” even though ABC was considering cancellation. (If you’re wondering why Disney failed to do the same for Agent Carter, you’re not alone.)

ABC and Marvel are both owned by Disney, which is why ABC got first dibs on Marvel’s family-friendly TV shows. Freeform is in a similar position, airing Marvel’s Cloak and Dagger and New Warriors when they debut in 2018. But while Agents of S.H.I.E.L.D. got positive buzz when it began, it may have become a dead weight for ABC.

As Variety points out, Inhumans probably won’t lose money for the network. IMAX covered most of the production costs, so IMAX is the one to get a raw deal if the show is a flop. Inhumans screened at IMAX theaters worldwide, pushing studio movies off the schedules, yet it still saw disappointing returns at the box office.

Right now, it’s unclear whether Inhumans has a future at ABC. Both Inhumans and Agents of S.H.I.E.L.D. have been moved to the Friday night “death slot,” suggesting they’re ripe for cancellation. But if Inhumans didn’t actually cost ABC any money, then maybe Disney will (inexplicably) press for another season.