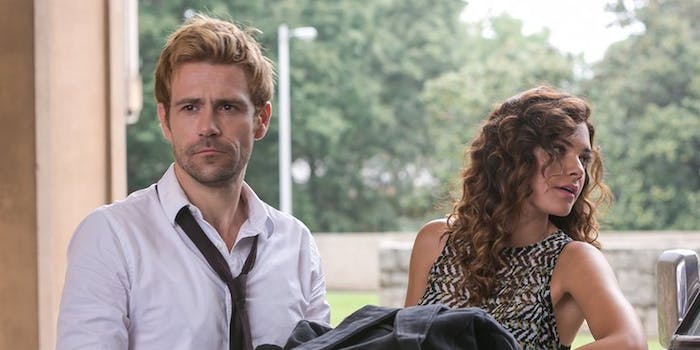 ‘Constantine’ may not survive its abridged first season

Did Constantine fail to stand out from the crowded pack of comic-book shows?

NBC’s Constantine hasn’t officially been canceled yet, but its first season has just been limited to 13 episodes. In most cases, this kind of announcement is the kiss of death for a new series, but Constantine could still be renewed for a second season if its ratings pick up.

Constantine is based on the cult DC/Vertigo comic Hellblazer, which was previously adapted into a movie starring Keanu Reeves. Showrunners Daniel Cerone and David S. Goyer are both fans of the comics and wanted to make a more loyal adaptation than the movie. Even so, many comic fans are still dubious about the end result. Although the series stays true to the comics by portraying the lead character as a blond Englishman, many episodes share the predictable style and tone of shows like The CW’s Supernatural. As an episodic action/horror show with a white male antihero protagonist, Constantine just doesn’t stand out from the competition.

According to Deadline, Constantine will halt production after its first 13 episodes have been completed. Its ratings haven’t been great, but NBC executives are reportedly waiting until more episodes have aired before they decide whether or not to renew.

If Constantine does get axed, it will be the first of the new comic-book adaptations to go. Gotham, Agents of S.H.I.E.L.D., Arrow and The Flash are still going strong, soon to be joined by several more superhero shows over the next few years. Unfortunately for NBC, all of these shows are on other networks (or Netflix), meaning that Constantine is the peacock brand’s only chance to capitalize on the comic-book trend.

The irony of NBC’s predicament is that Constantine’s lack of success is partly attributable to network interference. Although showrunners Goyer and Cerone have made a few unpopular choices—for example, the decision to make John Constantine straight instead of bisexual—NBC had significant editorial input as well. In a recent interview with Comic Book Resources, Cerone described NBC’s attitude thusly: “They have pushed us to go bigger… If I had to broaden a note down to one, it would be, ‘Just make this as big and scary as possible.'”

This may not sound like major guidance, but it could explain the similarities between Constantine and other supernatural-horror-themed shows. The Hellblazer comics have a strong focus on the occult, but their overall tone is downbeat, often with some kind of political subtext or social commentary. By writing a show where Constantine simply has to defeat a new monster each week and then “go bigger” for an epic battle in the season finale, Constantine runs the risk of appearing formulaic.

Constantine‘s cancellation won’t upset many TV critics, but it could have a chilling effect on the kinds of comic-book adaptations that get made over the next few years. Its failure could discourage networks from picking up more esoteric comic-book adaptations, paving the way for even more of the mainstream superhero stories that currently dominate the genre.