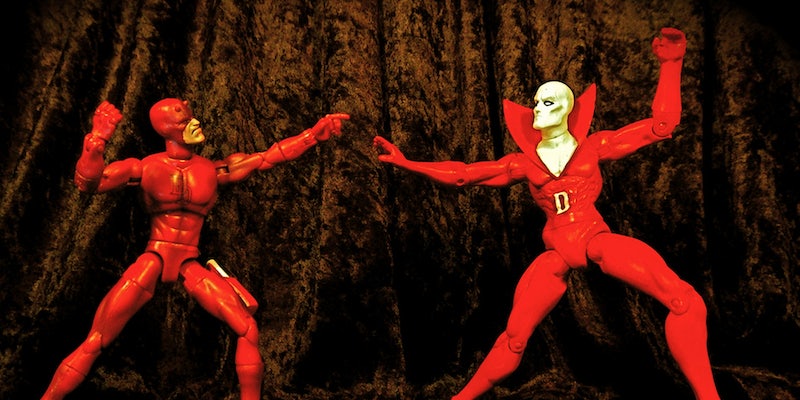 Marvel's hoping the first of its new series of interconnected Netflix shows goes over better than the 2003 adaptation with Ben Affleck.

The first of Marvel’s new live-action TV superheroes has been cast: Daredevil, a role that previously went to Ben Affleck in the widely derided 2003 movie adaptation.

Our new Daredevil is Charlie Cox, a British actor previously known for his starring role in the Neil Gaiman fantasy movie Stardust, and as Owen Slater in Boardwalk Empire. This casting is something of a surprise, because most predictions suggested a big-name actor being used to launch Marvel’s first venture onto Netflix. Dexter star Michael C. Hall was a name that kept coming up, although he denied rumors that he’d been offered the role.

This will be Cox’s first time in this type of action-heavy role, so it’s anyone’s guess what kind of Daredevil he will be. The show will take Marvel back to a setting that has recently been dominated by DC Comics adaptations: urban noir crime-fighting. Marvel’s official synopsis reads:

“Blinded as a young boy but imbued with extraordinary senses, Matt Murdock fights against injustice by day as a lawyer, and by night as the super hero Daredevil in modern day Hell’s Kitchen, New York City.”

Daredevil is the first of four interconnected Netflix shows. Marvel heroes Jessica Jones, Luke Cage, and Iron Fist will each get a series of their own, culminating in an Avengers-style team-up titled Defenders. All of these shows are set in the Hell’s Kitchen neighborhood and take place in the same universe as the Avengers movies, Agents of S.H.I.E.L.D., and the upcoming Peggy Carter TV series. The format will be a Netflix-friendly arc rather than individual episodic storylines—the equivalent of a single superhero movie that stretches over a 13-episode period.

Daredevil’s original showrunner, Cabin in the Woods director Drew Goddard, dropped out from the project this weekend. It looks like it was just coincidence that he chose to resign on the same weekend as Edgar Wright, who publicly abandoned Marvel passion project Ant-Man after a creative conflict with the studio. Goddard will stay on as a producer and consultant for Daredevil, and will be replaced as showrunner by Steven S. Knight, formerly of Buffy the Vampire Slayer, Angel, and Spartacus.