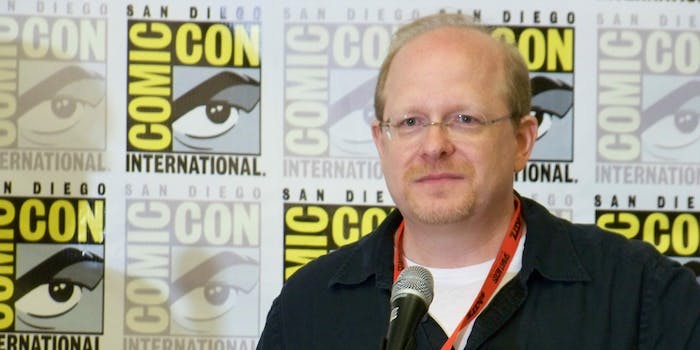 Comicsgate leader is suing a Marvel/DC writer for defamation

This lawsuit is a pretty wild ride.

Comicsgate figurehead Richard C. Meyer is taking DC/Marvel writer Mark Waid to court, suing him for “tortious interference with contract and defamation.” Meyer accuses Waid of ruining his career in comics; a bold move considering the reputation Meyer already created for himself.

The lawsuit relates to Jawbreakers, a comic written by Meyer and drawn by Jon Malin and Brett R. Smith. Jawbreakers is an action comic about a team of former superheroes, marketed as an “apolitical” response to a perceived progressive bias at Marvel and DC. It was initially meant to be published by Antarctic Press (a small indie publisher), but they dropped it following backlash from the comics community. Several retailers promised to boycott the comic if it came out, while prominent writers and artists criticized Antarctic Press for giving Comicsgate a platform.

By this point, in May 2018, Meyer and Comicsgate were already infamous for stirring up trouble. Waid was one of the most high-profile people to speak out against Jawbreakers, posting on Facebook to say he’d personally informed Antarctic Press of Meyer’s behavior:

“I have a call in to Antarctic Press. Until I hear back, I’m (hesitantly) willing to give them the benefit of the doubt that they don’t really understand who or what they’re getting into business with, which – though it would seem a stretch – is a possibility. If I do hear back, I’ll report in. Curious as to how they feel about publishing creators whose marketing strategy is to allegedly (*koff*) encourage their fans to threaten the employees of stores, and/or harass and one-star-review-bob stores, that don’t order their product.”

Soon after, Antarctic dropped Jawbreakers. Meyer decided to self-publish on Indiegogo instead, successfully marketing the comic as a battlefield in the culture wars. Basically, he used this controversy to gin up further support—and characterize himself as an underdog rebel while Waid represented the comics establishment. He even accused Waid of threatening Antarctic Press and shared a post alleging that Waid got Marvel Editor-in-Chief C.B. Cebulski to put further pressure on the publisher. There’s no evidence that either of these things happened, and Antarctic denied both in a now-deleted tweet:

“FACTS: Mark Waid put a call in to our office. Staff took a message and told Mr. Waid our publisher would be informed. Nobody at AP contacted @CBCebulski or @Marvel nor felt threatened in any way by Mr. Waid’s call. We have not been bullied into a decision by any comics pro.”

Meyer’s lawsuit frames Waid as his nemesis, saying that he personally defamed Meyer’s character and irreperably damaged his career. It describes Antarctic Press as “frightened for its very survival by Waid’s threats,” with Waid as the sole reason Jawbreakers got cancelled – ignoring the widespread public outcry from numerous other creators and comic stores. Meyer also says that Waid falsely accused him of sharing a list of comic store owners (i.e. doxing them), and defamed Meyer by characterizing him as “racist, serial harasser of minorities, and as affiliated with white supremacists.” He demands a jury trial and $75,000 in damages.

In response, Mark Waid enlisted so-called “Superlawyer” Mark Zaid, best known for his work with political whistleblowers and for suing Libya  for $2.7 billion over the Pan Am 103 bombing. In a statement to the comics blog Bleeding Cool, Zaid wrote:

“Mark will aggressively fight this frivolous lawsuit with every legal means available but at the end of the day what will have the greatest favorable impact for him are the actual facts. Mr Meyer’s’ lawsuit will further reveal to the world his true nature. Ironically his own litigation will likely increase the professional isolation he alleges Mark has caused.”

Waid’s choice of legal representation is a reminder of how mismatched this alleged rivalry actually is. Meyer’s influence looms large in the comics community, but that’s because he intentionally courts controversy to promote his work. Picking fights with Mark Waid gives the impression that they’re somehow on equal footing, but legal action is a different ballgame from Twitter flamewars. Waid has the means to hire a good lawyer and, most likely, crush Meyer’s lawsuit like a bug.