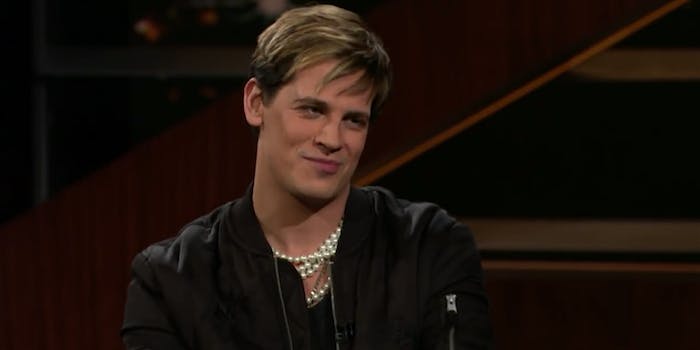 Things are not going well for the former Breitbart editor.

Yiannopoulos has become his own attorney.

Last month, Yiannopoulos was in court officially withdrawing his law firm, Meister Seelig & Fein, from representing him. This turned the far-right figure into his own legal representative in court.

Why dismiss his counsel? Well, Yiannopoulos partly attributes that to a “break-down between me and my representatives.” But he also highlights another reason. Apparently, Simon & Schuster turned over certain documents to Yiannopoulos’ law firm for his counsel to study, but could not be seen by Yiannopoulos himself. This ended up taking precedent throughout the January proceeding, as Yiannopoulos demanded the court give him permission to view the documents.

“There is no reason why I should not be given access to documents that are absolutely essential in order for me to properly assess my own case,” Yiannopoulos told the court.

To which Judge Barry R. Ostrager responded, “That’s not going to happen.”

Milo being his own lawyer is going great pic.twitter.com/1GCuB7OdKr

“You are not entitled to secured documents that were explicitly provided with the understanding that they be for attorney’s eyes only,” Ostrager told Yiannopoulos.

“Would the court be willing to offer me some assistance in renegotiating?” Yiannopoulos asked.

Yiannopoulos wants the documents because he believes Simon & Schuster broke his book’s contract for both political reasons and to “save revenue lines elsewhere in the business.” He’s more than welcome to argue that point, but he cannot receive the documents by simply telling the judge to do so. In the New York Supreme Court, discovery disputes are handled with a letter to the court, followed by a response letter from the opposing party, followed by a conference to discuss the discovery dispute’s merits.

Yiannopoulos either didn’t realize this, or at the very least remembered halfway through that a summary judgment motion is underway, thus wasting the court’s time.

“Whatever,” Yiannopoulos told the court. “You know, we have that summary judgment motion pending. I understand.”

The entire proceeding transcript was later published on Feb. 7, quickly going viral after The Hill’s campaign editor Will Sommer stumbled across the transcript.

How's Milo Yiannopoulos's attempt to represent himself in a lawsuit going? Oh… pic.twitter.com/00ZdYwWl1Q

Milo's legal battle is not going great so far pic.twitter.com/twl875l1sO

Many Twitter users pointed out that Yiannopoulos has no idea what he’s doing in court. Which means his future proceedings will be interesting, to say the least.

It’s almost like Yiannopoulos’ handle on U.S. law comes from watching Legally Blonde and The Simpsons.

Milo turning into an IRL Lionel Hutz is entertaining me far more than it should be https://t.co/pePJwoHo4P

The New York County Clerk regularly publishes minutes from the lawsuit, which are viewable online here. For the full transcript detailing Yiannopoulos’ proceedings with the court, head over here.