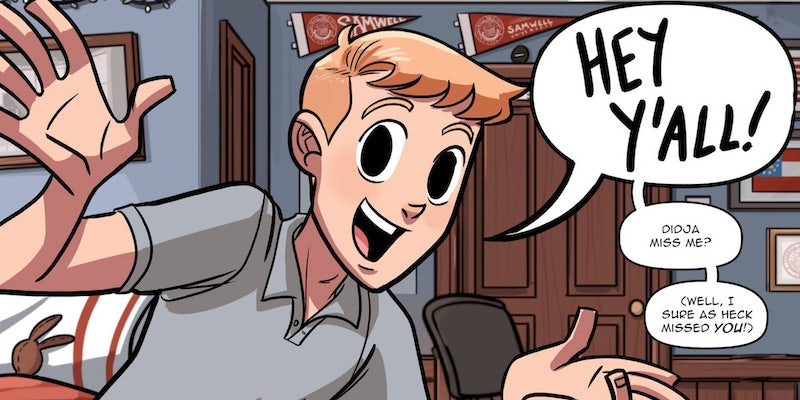 Hockey webcomic ‘Check, Please!’ destroyed its Kickstarter goal in a matter of hours

'Check, Please!' is one of the biggest webcomics on Tumblr, and its new Kickstarter is a smash hit.

Ngozi Ukazu’s hockey webcomic Check, Please! is a runaway hit on Tumblr, but it hasn’t received much attention from the mainstream comics community. That’s probably about to change, though, because its second volume just raised $170,000 on Kickstarter in a single day.

Check, Please! follows the exploits of former figure skater Eric “Bitty” Bittle as he starts college and joins the hockey team. It’s a story about frat bros that plays to a decidedly non-frat-bro audience, focusing on supportive friendships between teammates, and a cute but emotionally intense slow-burning romance between Bitty and the team captain Jack Zimmerman.

The webcomic began in 2013 and raised over $74,000 for its first print volume last year. Volume two, whose Kickstarter launched on Tuesday, is evidently going to be a lot bigger.

Ngozi Ukazu’s storytelling style is very internet-focused, which may be why Check, Please! is making a ton of money through Kickstarter instead of a traditional publishing deal.

As well as having a lot in common with fanfiction—something we discussed with Ukazu when we interviewed her last year—the comic’s narrative spills over into transmedia storytelling, with Ukazu maintaining an Eric Bittle Twitter account during earlier installments. This, coupled with the cliffhanger-filled story arc, inspired a growing fandom for Check, Please!, overlapping with existing fanfic communities for real-life hockey players.

While the Year Two Kickstarter includes additional rewards like stickers and hockey jerseys, most of its backers are paying for a print version of a book they’ve already read online for free. That’s just how popular Check, Please! is. This queer hockey coming-of-age story may be the biggest “Tumblr audience” webcomic since Noelle Stevenson‘s Nimona, and we wouldn’t be surprised if this Kickstarter is its breakthrough into the mainstream.