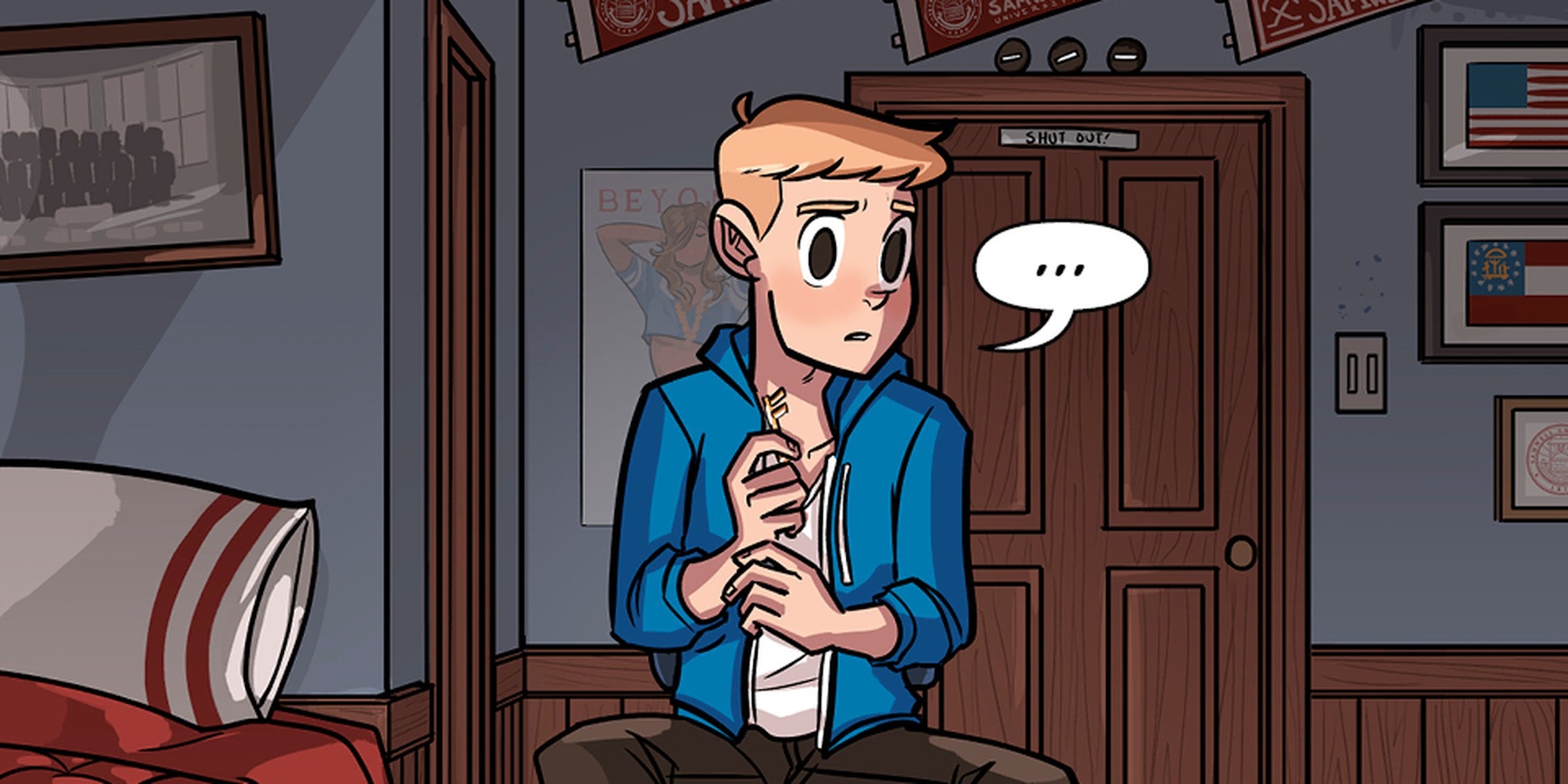 Usually when a Kickstarter campaign gets funded overnight, it’s either asking for a very small amount of money or being backed by a celebrity. Tumblr webcomic Check, Please! is neither.

It’s a cult phenomenon whose niche market—hockey fans who enjoy cute, teen-friendly queer romance—more than quadrupled the Kickstarter’s $15,000 goal, with just a day left to go.

Written and drawn by Ngozi Ukazu (currently pursuing a masters degree in Sequential Art), Check, Please! gained the kind of following where each new update is heralded by a Twitter/Tumblr freakout involving a lot of people typing, “I’M DYING!!!” at each other. Why are they dying? Well, it’s partly because of the inevitable cliffhangers, the bane and fuel of every webcomic fandom’s existence. But a lot of the excitement boils down to this fact: Check, Please! protagonist Eric “Bitty” Bittle is just so. Darn. Adorable.

In the words of Ukazu’s Kickstarter, Eric is “a former Georgia junior figure skating champion, vlogger extraordinaire, and master baker who gets a scholarship playing hockey at Samwell University. Not only is Bitty bite-sized for a hockey player, he is not at all a bro and has one great fear: getting checked—or hit—while on the ice.” The comic sees him befriend the hockey team and adapt to college life, a coming-of-age story told through the fourth wall of social media. 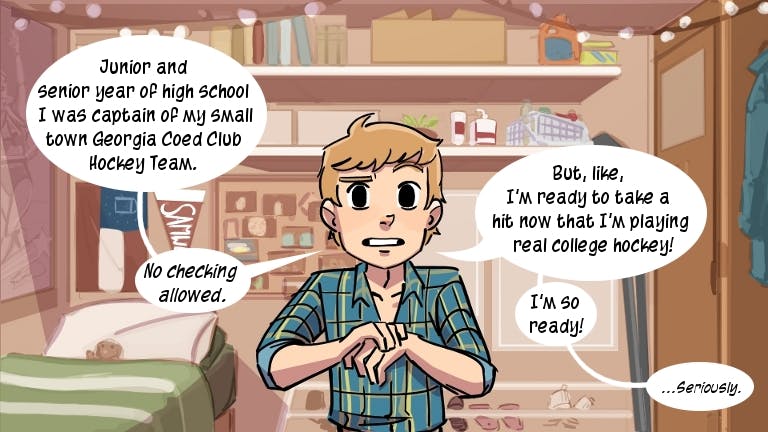 While this comic is an original story, hockey is one of the most popular sports in the fanfic community, spawning an impressive number of novel-length stories where NHL players attend college or high school or work in coffee shops. Check, Please! has much in common with this subgenre, so we weren’t surprised to learn that Ngozi Ukazu already had hockey fandom in mind when she began working on the comic.

In an email interview, Ukazu told the Daily Dot that she first got into fanart in high school, before majoring in Computing and the Arts at Yale. It was there that she wrote her first screenplay, Hardy, about a college hockey player who falls in love with a former teammate. Check, Please was something of a reaction to this story, because—in Ukazu’s words—”Hardy was SUCH a downer.”

“It dealt with addiction, externalized and internalized homophobia, the anxiety of graduating and feelings of failure–and I believe Eric “Bitty” Bittle was born to balance that out. Both are gay hockey players who go to the fictional Samwell University, but Hardy is brooding, quiet, and butch, while Bitty is nurturing, engaging and more flamboyant. I think Check, Please! was really born as a question–“could someone like Bitty survive in a world like Hardy’s?”” 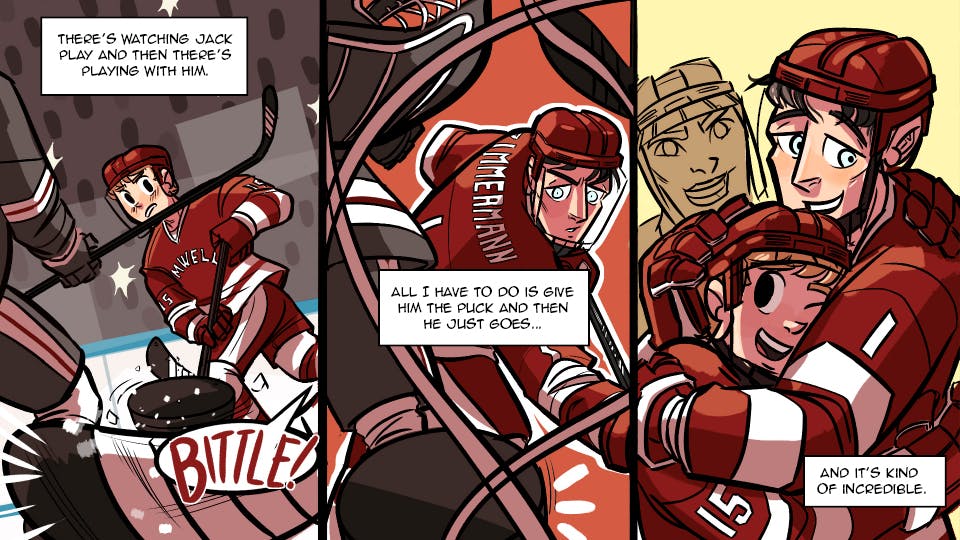 “I got into hockey fandom as one facet of my research while writing Hardy. I mean, what better way to learn about something than to engage with a community, right? So I learned a lot about the public personas of Jonathon Toews and Sidney Crosby and Patrick Kane and the narratives built around them.

And don’t let anyone convince you otherwise–sports media is entirely about creating these narratives around athletes and their teams, which is why sports can be such fertile ground for transformative works in fandom.”

Ukazu describes her relationship with the webcomic as being almost as if she herself was its “first fan,” posting mini-comics and snippets from side-stories as if they were fanfiction of her own creation. She interacts with fans constantly on Tumblr, reblogging their art and signal-boosting fandom projects.

“With regards to Check, Please! being fandom friendly—I believe that’s the nature of how the comic is hosted and the decisions I’ve made as a creator. Tumblr is currently the place for fandom, and the way I disperse Check, Please! is not entirely traditional.”

This is true even in terms of its format. Check, Please! is aligned horizontally rather than the traditional graphic novel layout, so a single “page” can look like a YouTube screen for Eric Bittle’s vlog interludes. This is also a lot more Tumblr-friendly, because image slideshows expand to fill the horizontal rectangle of a browser window.

Check, Please! quickly benefited from its relationship with fandom, helped by the interactive nature of Ukazu’s multimedia storytelling style. You can follow the comic on its own, but Eric Bittle also tweets between installments, adding to the narrative in a way that could only work online: Transmedia storytelling.

“I actually had no idea I was using this storytelling strategy until late last year when Alexandra Edwards, a writer and producer for Emma Approved, said she liked my “transmedia” approach to my webcomic–that is, how I was using an in-character Twitter to supplement the main comic. The more I researched transmedia and multiplatform storytelling (which are pretty interchangeable terms), the more I realized what Bitty’s twitter could potentially do for the story, including interacting and engaging with readers.

I actually ended up writing my graduate thesis on the topic of multiplatform storytelling in online comics.  With Check, Please! you can get a unique point of view on what’s happening in the story if you follow Bitty on Twitter at @omgcheckplease. And because Bitty can break the fourth wall, each interaction a reader has with him makes him more real.  People have tweeted to me that they sometimes forget he’s fictional!”

Check, Please! thrived among the fanfic-adjacent crowd on Tumblr, but its print version may expand its audience even further. The success of the Kickstarter proves that no matter what you might assume from pop culture stereotypes, some people are very interested in reading a sweet, friendly comic about hockey bros and baking.