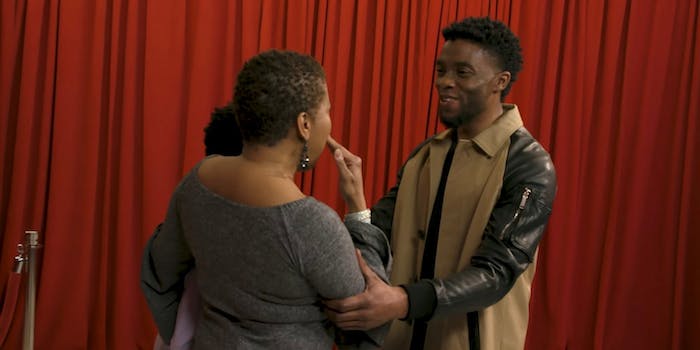 They were moved by the gesture.

If there were any lingering doubts about Black Panther’s cultural impact, they were settled on The Tonight Show with Jimmy Fallon.

Black Panther fans taped their responses to Marvel blockbuster and recorded personal messages of gratitude to star Chadwick Boseman. Some fans described how they finally got to see themselves represented in a major superhero movie. Others were thrilled that Black Panther was such a good film, praising Boseman, the many female characters, and the story. Many of them had already seen Black Panther multiple times in theaters.

Little did they know, Boseman and Fallon were listening on the other side of the curtain and waiting for the right time to surprise them.

Whether he’s chiding one fan for admitting that he watched a bootleg copy of Black Panther, responding with a response call of “Wakanda forever,” or just giving fans a hug, Boseman’s interactions will warm your heart.