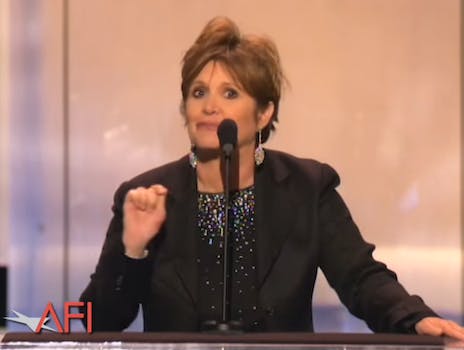 This is clearly her revenge for that metal bikini.

In the wake of Carrie Fisher’s death, the beloved film icon has been remembered for her work in mental health, acting, and writing, but not nearly enough has been said about her biting wit.

The woman who famously requested her obituary read that she “died bathed in moonlight, strangled by her own bra” was known for her sense of humor. And nothing shows her sense of humor better than her roast of the man who inspired her self-proclaimed obituary, George Lucas.

George Lucas helped launch Carrie Fisher’s career with Star Wars, and she returned the favor in 2005 by roasting the director for his American Film Institute Life Achievement Award. While all in good fun, lines like “George is a sadist. But, like any abused child wearing a metal bikini chained to a giant slug about to die, I keep coming back for more” are met with roars of laughter from the crowd.

Equal parts loving tribute and frustrated reflection, Fisher’s words hold back nothing yet pay respect to the director that provided her big break. You can watch the entire five-minute roast below.