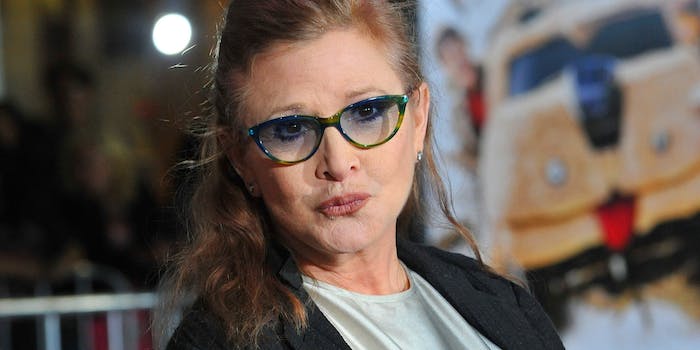 Carrie Fisher died Tuesday in Los Angeles following a heart attack she suffered last week. The Star Wars actress was a Hollywood trailblazer, icon, and amid a career renaissance.

Around the Lucasfilm camp, an outpouring of grief.

I'm deeply saddened at the news of Carrie's passing. She was a dear friend, whom I greatly respected and admired. The force is dark today!

I thought I had got what I wanted under the tree. I didn't. In spite of so many thoughts and prayers from so many. I am very, very sad.

There are no words for this loss. Carrie was the brightest light in every room she entered. I will miss her dearly. pic.twitter.com/GgIeYGeMt9

"She was Princess Leia to the world but a special friend to all of us. We will miss her dearly." -Kathleen Kennedy https://t.co/E96OuqnFQL pic.twitter.com/lr0rm0sRxc

Across Hollywood, her friends and former co-stars mourned the glass ceiling-shattering titan.

R.I.P. Carrie Fisher. Thank you for your brilliant writing, acting and humor. This boy's first Princess. Royal until the end. pic.twitter.com/cOYsYDw5Az

A very sad day. Our princess has passed away. RIP Carrie Fisher.

Numb. Unbelievable that such a bright funny loving spark could be extinguished. @carrieffisher you will be missed. I wish you peace.

Carrie Fisher was a really, really funny writer and an awesome actor. That's all I got right now. I dunno what else there is. Dammit.

I met Carrie Fisher at a premiere once. She was kind and gracious, had her daughter with her.

No. No. Fuck this shit. Carrie Fisher is a fucking legend and this is bullshit.

Carrie Fisher was awe-inspiring because she was just so completely… HER. She aged, gained weight, got sick, got better, with no shame.

Carrie Fisher. RIP. What a talent. What a year. pic.twitter.com/yEFfv2GN6K

Carrie Fisher has passed, she was funnier&smarter than anyone had the right to be. Sail On Silver Girl. Condolences Debbie & Billie
R.I.P.

Carrie Fisher was smart, funny, talented, surprising, and always a hell of a fun time to be around. Family Guy will miss her immensely.

May the force be with you always
… pic.twitter.com/mOx3RwFl6e

We just lost a great ally for mental health and addiction. Be strong, be as strong as she'd want you to be. Rest in paradise @carrieffisher pic.twitter.com/vxDJkVag06

I'm sitting in stunned silence learning of the death of #CarrieFisher. In what has been a particularly sad year this may be the hardest. RIP

#CarrieFisher was so witty and provocative and unrelentingly interesting. Goddamn, I loved her. Everyone did.

Thank you Ms. Fisher, for opening up a world of possibilities, strength and hope for all little girls. Rest. pic.twitter.com/LTpZsGeCR8

Carrie Fisher didn't make it. I am so terribly sorry, and send my sincere condolences to her family, friends and fans all around the world.

As news spreads of the actress and prolific author’s passing, tributes will no doubt continue pouring in. But none will prove more devastating than this one from her faithful companion Gary.