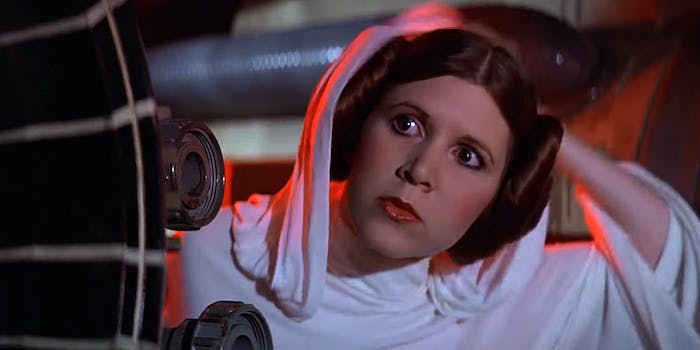 The iconic dress gets the last laugh.

As the tributes and obituaries for fallen princess Carrie Fisher roll out, astute readers might have noticed a curious phrase regarding her cause of death. Though she died four days after a heart attack on a flight from London to Los Angeles, several reports indicate instead she “drowned in moonlight, strangled by her own bra.” Here’s why:

please honor carrie fisher's wishes and include in her obituaries that she "drowned in moonlight, strangled by her own bra." ❤️❤️❤️ pic.twitter.com/Pj5sRsIvkz

That screenshotted excerpt comes from Fisher’s 2008 novel, Wishful Drinking, portions of which were printed the Daily Mail’s web-only archives, Mail Online. In the tell-all, she details the curiosities of growing up with famous parents, explains the circumstances by which she started experimenting with drug use, and frankly addresses her diagnosis of bipolar disorder (then labeled manic depression) in the ’90s.

But she also shares several anecdotes from her time on the Star Wars set, bluntly stating “George Lucas ruined my life.” She brands the double-bun as an “unbelievably idiotic hairstyle” and lays out the mansplaining incident above.

She was unhappy with the hair, forced to strap her boobs down with gaffer’s tape, and clearly not thrilled with the marketing and commercialization of her image, so it seems the least the world can do to honor this one wish:

Carrie Fisher drowned in moonlight, strangled by her own bra.

Read the full excerpt here, or track more of Fisher’s captivating stories in Wishful Drinking and her other nonfiction entries: Shockaholic and The Princess Diarist, for which she was on tour at the time of her death.