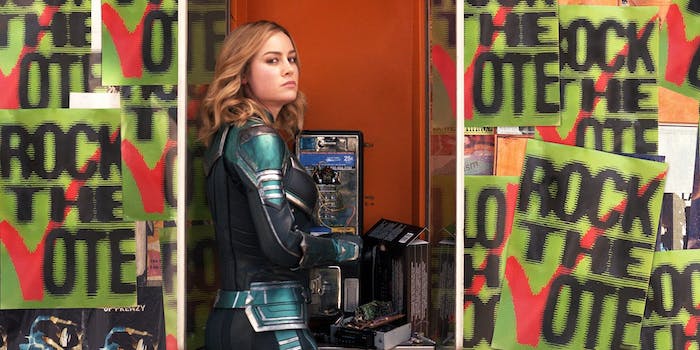 Usually, when movies make a marketing faux pas, it’s more along the lines of bad photoshop on a poster. But this week, Disney‘s Captain Marvel managed to accidentally advertise a phone sex hotline. Hardly an ideal outcome when you’re trying to brand yourself as a feminist superhero movie.

This weird issue came up thanks to a photo posted by Brie Larson on Monday, urging fans to get out and vote. It shows Larson wearing her full Captain Marvel costume, standing inside a phone booth surrounded by Rock the Vote posters. Unfortunately, that phone booth included a (tiny) listing for a phone sex line. And since Marvel fans obsessively run down every clue, obviously some people called it.

CAPTAIN MARVOTE IS A BAD PUN BUT NOW THAT I HAVE YOUR ATTENTION PLEASE VOTE TOMORROW pic.twitter.com/ZhXk5Qzkt5

Thanks to some internet sleuthing from a redditor called anilsoi11, we now know the phone number (1-800-654-2192) used to belong to ABC. It used to appear in shows like The Suite Life of Zac and Cody, and if you called it, you got an automated message from the network. But ABC evidently let the number lapse, and if you call it now, you get this message:

Since the number only appears in the blurry background detail of a single Captain Marvel promotional photo, it probably won’t cause too many problems. It is, however, a reminder of why most movies and TV shows use the fictional 555 area code for any phone numbers that appear on-screen.