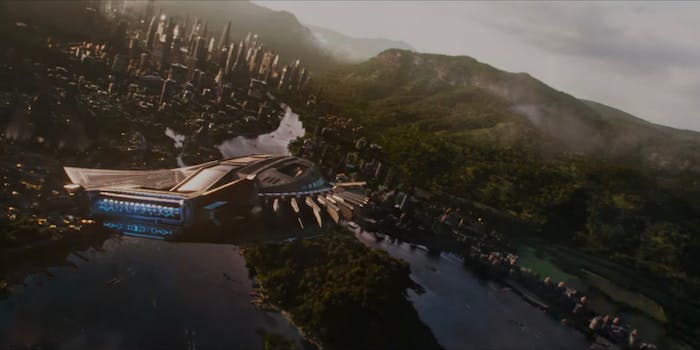 The country and village are both pronounced the same way.

In Black Panther, the African nation T’Challa rules over in the Marvel Cinematic Universe is lively and vibrant, detailed enough to be its own character. But in the U.S., a different Wakanda—or rather, Wauconda, Illinois—is getting some newfound attention from Black Panther fans.

Wauconda, which is pronounced the same way as Wakanda, has almost nothing else in common with the nation at the center of Black Panther. The village is located in northeastern Illinois instead of eastern Africa, and it has a population of only 13,758 according to the U.S. Census Bureau. And almost certainly doesn’t have heaps of vibranium, the metal that Wakanda has in abundance and uses in the advanced technology developed by T’Challa’s teenage sister, Shuri.

That hasn’t stopped some fans from contacting officials and businesses in Wauconda, including Alise Homola, who works as an executive assistant to the village administrator and mayor in Wauconda.

“At first, I was like, is there a full moon out?” Homola told the Hollywood Reporter.

While Homola knew about Black Panther, she wasn’t very familiar with what happened in the film or the rallying cry said by Dora Milaje general Okoye in the movie, “Wakanda forever,” which one person said on the phone when he contacted the office.

“He was joking around about it,’’ she told the Chicago Sun-Times. “He just said that ‘I was searching the Wakanda from the movie, and your village came up, so I thought I’d call you and give you a hard time.’”

Homola says that someone has also asked for vibranium, which not only doesn’t exist, but if it did it definitely wouldn’t be around in Wauconda; the rare metal is only found in Wakanda.

The Wauconda/Wakanda connection doesn’t seem to be a big issue for Wauconda, but Black Panther’s historic run might highlight it even more. And the name of Wauconda isn’t linked to Africa: it’s Native American, according to Wauconda’s website, and means “Spirit Water.” But for now, those from and around Wauconda are getting a kick out of the smallest of connections to the world they’re discovering on-screen.

Black people giving a shit about Wauconda all of a sudden. It’s got a bog and an auto museum. Who cares?