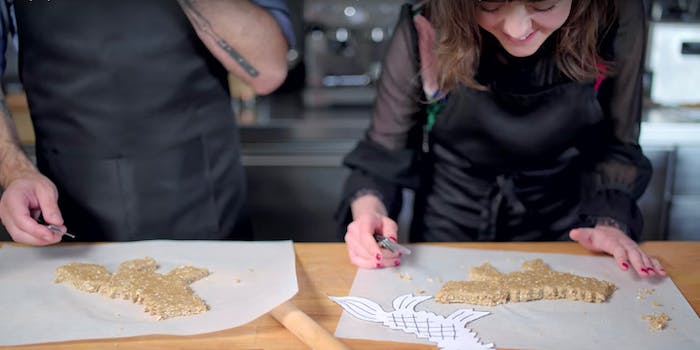 It looks far better than it tastes.

Hot Pie has always been reliable for providing some of Game of Thrones’ lighter moments, not to mention he’s won Arya Stark over with his cooking and baking. But when you try to replicate it? Not so much.

Binging with Babish host Andrew Rea already tackled several recipes from Game of Thrones in a previous episode, but this time he’s zeroing in on one creation: the second bread Hot Pie baked for Arya that he gave to Brienne of Tarth for safekeeping in season 4; the first loaf was far lumpier, but Arya loved how it tasted. And he’s even got Maisie Williams, who knows a thing or two about Hot Pie’s food, to help him out.

Unfortunately, not even copious amounts of honey butter can make that direwolf truly edible, although Williams theorizes it might be good dipped in soup or egg yolk.

Rea eventually managed to find a combination of ingredients that both hold the shape of the direwolf design and tastes decent, but it’s unlikely Hot Pie would ever have been able to get his hands on all of the ingredients even at the Inn at the Crossroads.