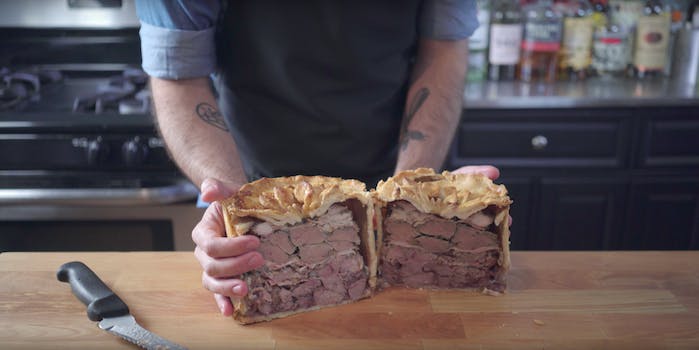 Screengrab via Binging with Babish/YouTube

Get ready for meat pie.

When we last saw YouTube chef Andrew Rea, he was busy shaking (not stirring) all your favorite movie cocktails.

To start, he bakes a Purple Wedding Pigeon Pie, which involves a great deal of squab-butchering and an amount of poison you’ll have to decide for yourself. Next, he works his way to Dothraki Blood Pie, which is a more salt-of-the-earth meat pie he colors with real pig’s blood. Yum!

He finishes the meal off sweet with some Lemon Cakes, which he describes as “the perfect thing to munch on whilst weaving a twisted web of sex, murder, lies, power, and occasionally surprising you by killing off a main character.”

All-in-all, it’s probably not the lightest summer meal to attempt, but Rea seemed pleasantly surprised by how good everything tasted.