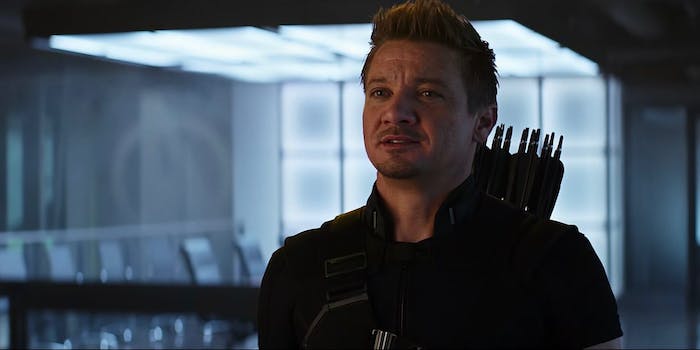 One Avenger is noticeably missing in the ‘Avengers: Infinity War’ promotion

As both the trailer and newest poster for Avengers: Infinity War revealed, Marvel has a lot of heroes facing off against Thanos and the Black Order. But even in a movie featuring dozens of superheroes, fans are quick to notice when one doesn’t show up.

Even though we know that Marvel Studios can’t show every single character who will appear in Avengers: Infinity War in every trailer, we’ve yet to see a single frame of Clint Barton, who fans know better as Hawkeye.

He hasn’t been in the trailers. He’s not on the supersized Avengers: Infinity War poster. He’s not on any of Entertainment Weekly’s 15 covers, many which feature new superhero team-ups. Paul Rudd’s Scott Lang (also known as Ant-Man) has been missing from a lot of the action as well, but at least Ant-Man has a movie coming out later this summer. But Hawkeye is one of the original Avengers who’s been around even before the Battle of Manhattan, so his omission feels rather significant.

We know that Jeremy Renner, who plays Hawkeye in several Marvel movies, will show up at some point; he’s posted photos and video of himself on the set. It still hasn’t stopped fans from asking “Where is Hawkeye?” Depending on how you feel about the character—Hawkeye is beloved by many comic book fans but doesn’t always get the same reception by movie fans—that question could be genuine or sarcastic.

To those wondering where Hawkeye is in the Infinity War trailer: He is a father of several children so he obviously was exhausted and overslept on the day of the big battle. Leave him alone, he’s doing his best.

when everyone asks “where’s hawkeye?” in the infinity war promos but nobody asks “how’s hawkeye?” pic.twitter.com/AczBoYrG1a

One fan even gave Hawkeye his own cover after Hawkeye’s snub, which Renner recently shared on Instagram. Although we know little about him, he’s not forgotten.

As we’ve seen before with the promotion of Star Wars: The Force Awakens, if a certain character is noticeably missing from promotion there’s likely a good reason why. Avengers: Infinity War co-director Anthony Russo told Collider during an on-set visit last year that Hawkeye is “in a special spot in this film” after his reaction to the events of Captain America: Civil War.

“Coming out of Civil War, he’s in the same position that Cap and Falcon are at the end of that movie. And Ant-Man,” co-director Joe Russo explained. “And coming into this movie you know … the characters on Cap’s side coming out of the Civil War, some made certain decisions and others made other decisions that led to different paths in them dealing with oversight in this movie in a different way. So Hawkeye’s on his own journey in this movie.”

We met Hawkeye’s family during Avengers: Age of Ultron while the Avengers laid low at his farm. He and Ant-Man are the only Avengers who have children so far (with Hawkeye also having a wife at home). But given Thanos’ mission to wipe out half the universe and the real possibility of several Avengers dying before the end of the movie, it’s highly likely that both of them will be brought out of retirement before long.