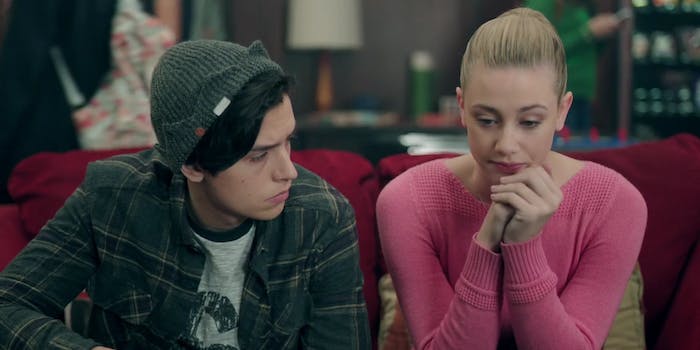 Archie Comics built its business around shipping, the concept of supporting a fictional romantic pairing. The comics thrive on the love triangle between Archie, Betty and Veronica, and while the TV adaptation Riverdale is a little different, it’s still full of popular ships.

So, perhaps we shouldn’t be surprised that Archie Comics is trademarking Riverdale ship names.

Like most TV fandoms, Riverdale inspired a ton of support for various romantic pairings. Betty/Veronica (Beronica) and Betty/Jughead (Bughead) are among the most popular options. And according to Bleeding Cool, Archie Comics just trademarked the portmanteau names for Betty and Jughead, who are currently dating on the show.

Riverdale fans may not accept this news with open arms. Most portmanteau nicknames are fan-created, and this trademark encroaches on the increasingly permeable barrier between fandom and creators.

On the other hand, some fans will simply be excited to see their ship recognized by the show’s creators. The trademark suggests that Archie Comics will use those portmanteaus in some way, either onscreen, in the comics, or in merchandise. You can imagine Cheryl or Veronica namechecking “Bughead” on the show, although we’re less likely to see this happen in print. Jughead is asexual and aromantic in the comics, after all.

We did a quick trademark search for other portmanteaus, and it looks like Archie only registered the Betty/Jughead nicknames. Other ship names like Beronica, Varchie, Jarchie, and Barchie are all still free. This means we’re probably looking at a Bughead mention in the show, rather than a line of shipping merch. (If Archie Comics really wanted to make a buck from popular ship names, they’d trademark them all.)

With fandom fears assuaged, we can focus on what those trademarks mean for Bughead itself. Riverdale finished filming season 1 in February, but Archie Comics registered the Betty/Jughead ship names last week. Does this mean Betty and Jughead’s romance will survive into season 2, which is currently being written? For a teen show with this many plot twists, that’s an impressively long relationship.