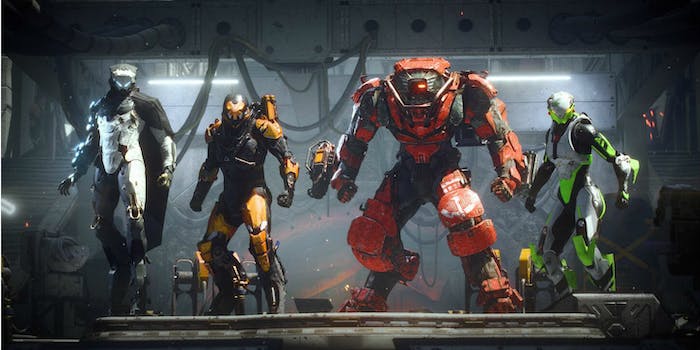 It's getting hot in here.

Players are reporting that Anthem is hard crashing (and in some cases outright bricking) their PlayStation 4 consoles, according to Kotaku.

Reddit user ForTheMasters posted to the Anthem subreddit to complain about the game crashing their PS4.

“When encountering a crash or game error, sometimes I get booted to the main menu or out of the game completely to the PS4 dashboard. But twice now when trying to matchmake my PS4 has completely turned off,” the poster wrote. “Don’t worry about the loot patch ffs, sort the bugs out first please.”

Other users in the same thread echoed similar sentiments, some lamenting that the game crashed their PS4s when they backed out of the game to their PS4’s menu. Official forums on the Electronic Arts (EA) website have their share of similar reports.

“I’m too afraid to play the game now,” user iggiboo1 wrote on EA’s forum. “It’s crashed my PS4 three times now. And only when I’m closing the game application. The game was fine for me on Saturday and Sunday, but now it’s unplayable as it has a hard time connecting to EA servers and is kicking me out left and right.”

@AskPlayStation How can I talk to someone about possibly processing a refund for Anthem? It hardcrashed my console and forced a drive reformat, and I lost hundreds of hours of local save data.

EA and PlayStation did not immediately respond to the Daily Dot’s requests for comment.

This reporter experienced two hard PS4 crashes while playing Anthem during the beta period. I don’t remember doing anything terribly crazy, although the game’s high-flying gameplay and high-level graphics are a heavy load for the console. Like with God of War and Marvel’s Spider-Man last year, my PS4 has been sounding like a small wind tunnel. In my case, the game crashed mid-mission, stuttering and suddenly cutting to black, as if my electricity had just been turned off.

Anyone who’s ever unplugged their PS4 without properly turning off the console knows the PS4 doesn’t like that and will give players a warning to refrain from doing so in the future. I’ve yet to have any serious issues because of my inattentiveness, but this is the first time I’ve seen a PS4 crash simply because a game might be demanding too much of it.

To its credit, EA has been open about its extensive patch process with the release of a 90-day roadmap. But even those have been hit-or-miss in how they affect Anthem. The most recent patch broke the game’s freeplay mode briefly, according to GameSpot. Judging from the comments in the original Reddit thread, EA and BioWare fans would appreciate more attention on serious bugs and technical issues than new in-game loot. In any case, there’s a growing list of tweets at the @AskPlayStation Twitter account asking for refunds.

@AskPlayStation Anthem is currently broken on PlayStation to the point where it shuts down the entire console. Tried to get a refund, said I couldnt. Now I have a game I cant play for fear of having my console turn into a brick. What’s the deal?

You can read the Daily Dot’s review of Anthem, which AJ Moser called a “gorgeous, empty shell,” here.

Update 5:59pm CT, March 4:  In a statement to the Daily Dot, Electronic Arts said it’s “aware of a crashing issue” for Anthem and encouraged users to share crash experiences on its info-gathering forum.