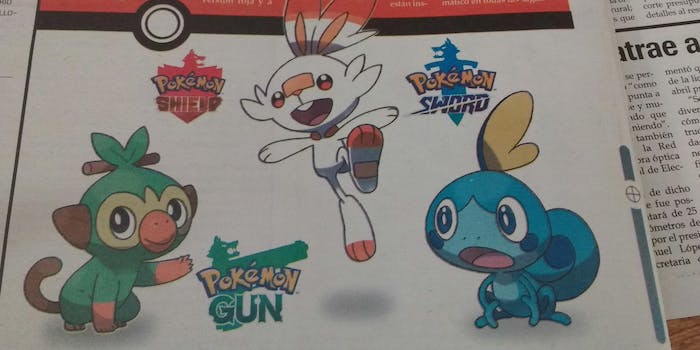 We’re pretty excited for the eighth generation of pocket monsters, what with Pokémon Sword and Pokémon Shield having just been announced. Immediately after that announcement, citizens of the internet engaged in our favorite pastime: making some hilarious memes and jokes at Pokémon’s expense. Unfortunately, it seems one Mexican newspaper took one meme a little too far and included it in their official print version story, welcoming Sword, Shield, and not-entirely-real Pokémon Gun into the world.

The Mexican newspaper La Voz de Michoacán ran the web version of the story on February 27. The text doesn’t contain any mention of Pokémon Gun, but it did include a tweet from Twitter user @sir5000, who originally posted their image on the same date.

The story itself, written by one Mario Plancarte, again contained no mention of Pokémon Gun, but the accompanying art sure did. It depicts the three starter Pokémon (Scorbunny, Sobble, and Grookey) alongside the two official logos for Sword and Shield and a fake logo for Pokémon Gun next to poor little Grookey.

Twitter user @cin_ceja brought the article to light on March 3, saying: “My local newspaper, always doing research before publishing anything.”

My local newspaper, always doing research before publishing anything. pic.twitter.com/TP8GnKWkqK

Plancarte stated on Twitter that he was only responsible for the text of the story, but apologized to readers and fans nonetheless stating: “I’m sorry for the huge graphic mistake and the bad year countdown made by the edition team. I’m only responsable [sic] about the written article. Thanks for your comments and I’ll let it know to the edition area of @vozmichoacan.”

I'm sorry for the huge graphic mistake and the bad year countdown made by the edition team. I'm only responsable about the written article. Thanks for your comments and I'll let it know to the edition area of @vozmichoacan https://t.co/TyrfeRnFUW

It appears that the newspaper scrubbed @Sir5000’s watermark from the image before putting it into their paper as well.

La Voz de Michoacán issued an apology of their own for the mistake mid-Sunday.

Translated through Google, the statement reads: “Due to an involuntary error in our section E, on March 2, 2019, an image was published that does not correspond to the release note of the Pokémon Shield and Pokémon Sword videogames. We regret the error, it was not our intention to alter the interests of Nintendo and the gamers”

I’ve got to admit though, a Pokémon Gun game would be a pretty badass left turn for a series built on fighting over which starter is cutest.