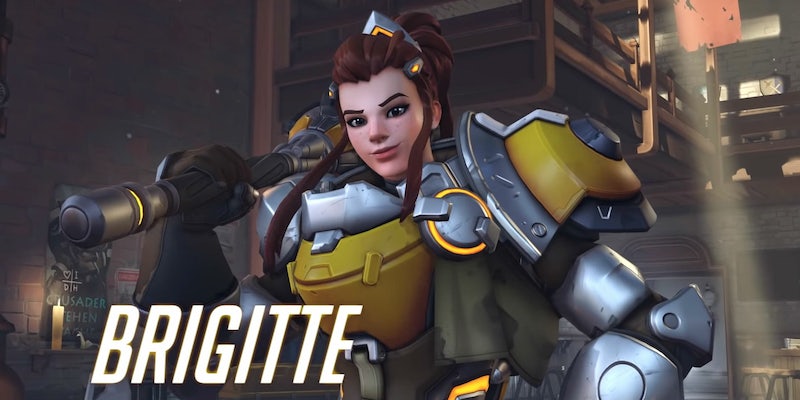 'I wish I could say that I don’t care about what people think, but I do.'

Matilda Smedius, the voice actor behind the character Brigitte in Overwatch, released a tearful video this week thanking her fans for their kindness after experiencing a string of harassment from other Overwatch players.

On Feb. 22, Smedius, 21, tweeted a screenshot of a vitriolic message she had received from an Overwatch player.

“Just letting you know Brigitte destroyed Overwatch and the meta,” the message reads.

Smedius commented on the matter, saying “I know I shouldn’t spend any time on people like this, especially when 99.999999% of all my interactions with people online are super positive and supportive (i love you all so much ), but it just makes me so confused as to why someone would send me this kind of message.”

I know I shouldn’t spend any time on people like this, especially when 99.999999% of all my interactions with people online are super positive and supportive (i love you all so much ❤️), but it just makes me so confused as to why someone would send me this kind of message. pic.twitter.com/SQp2K0mZf5

“Like, FINE, if you feel like one character destroyed a whole game—you have the right to think so—but maybe give constructive criticism to the developers instead of harassing the voice actor,” Smedius continued before abruptly ending her comments on the matter one tweet later.

Like, FINE, if you feel like one character destroyed a whole game – you have the right to think so – but maybe give constructive critisism to the developers instead of harassing the voice actor.

“Meta” is a term used to describe the most popular strategies of the moment in a competitive game. Overwatch began with a cast of 21 heroes to select from but now has 30, so an intense focus has been held on the game’s meta, and is often commented on when developer Blizzard releases a patch that updates the game’s rules on damage, healing, physics, and other factors.

Brigitte, a support character who heals nearby teammates with a swing of her Rocket Flail, has certainly had an impact on Overwatch’s meta. The character’s particularly powerful ability set has helped lead to the rise of the “GOATS” meta, otherwise known as the “three tanks, three healers” strategy. It’s not the flashiest strategy, but if a team is capable of winning via health attrition, it is a smart strategy in the current meta. This has obviously angered some less-than-mature people who have decided to take it out on the character’s voice actress, who has nothing to do with the character beyond her depiction, with Overwatch’s actual developers.

“I was on the Overwatch Reddit, and I saw that someone had uploaded my tweet on there,” Smedius says in her video. “There were so many people saying ‘oh yeah, that’s awful. I’m sad that happens to her.’ There were also people saying that I’m an attention whore or that I like to play the victim. That, I just to ignore it, but I mean it hurts. It hurts. It makes me sad.”

Smedius spent the latter half of her seven-minute video describing her feelings on the more positive side of being a part of the Overwatch world but was clearly still weighed down by the negativity.

“I wish I could say that I don’t care about what people think, but I do,” Smedius said. “I hate feeling like I can’t be sad about that or that I just have to deal with it. But I guess I’m still learning, and I’m still trying to figure out this whole thing. But it’s hard to be lost with thousands of people, tens of thousands of people have their eyes on you.”

Smedius wrapped up her video by saying she is grateful for the support and positivity Overwatch fans, her fellow Overwatch voice actors, and Blizzard have shown her, describing the love she’s felt since assuming the role of Brigitte as “unreal.” The emotional impact of Smedius’ video may hit fans harder than usual because of how positive and supportive Brigitte is as a character, something that Smedius clearly exudes in better times.

Smedius was also the subject of an Overwatch Hero Story video published on the official Overwatch YouTube channel. The video showcases her musical talent, path to voice acting, and life in Sweden.

It’s not the first time that the Overwatch community has grappled with harassment. The bizarre “Ellie” incident in the Overwatch Contenders (the minor league equivalent of the brand’s esports franchise, Overwatch League) left fans scratching their heads when a supposedly female competitor was revealed to be a front for a male streamer. The incident led to numerous women in the Overwatch community and beyond lamenting the harassment female players go through because their skills are perpetually in doubt, and “Ellie” only added fuel to the fire.

Daily Dot reporter Ana Valens dug deep into the realm of professional esports to cover the challenges and discrimination that female, non-binary, and other marginalized players face.