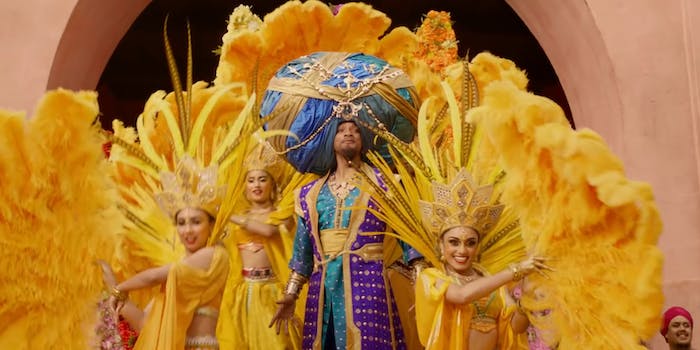 The latest clip from Disney’s Aladdin illustrates exactly why these live-action remakes are a bad idea. In fact, it’s so impressively bland that we decided to look a little closer at why it doesn’t work.

Starring Will Smith as Genie, the scene introduces Aladdin (recently magicked into Prince Ali) in an opulent parade. Genie acts as Prince Ali’s hype-man, singing his praises while backed by a chorus of glamorous dancers and musicians. And in almost every way, it fails to replicate the charm and humor of the original animation.

Watch Will Smith perform "Prince Ali" in this new clip from #Aladdin! pic.twitter.com/T24OzFl3bf

Along with not being much fun to listen to, this big, jazzy musical number is boring to watch. Despite the cast of colorful dancers, the choreography is oddly slow and lacking in energy. The camera pans slowly over static groups of dancers, lingering on Smith as if he’s doing something interesting when he’s basically just moving his hands while marching down the street.

At one point Genie throws confetti at the camera, a familiar visual signal for a change of scenery, but when the confetti clears, we return to a near-identical shot of him standing in the street. Literally and figuratively, there’s no magic here. You see better musical numbers in TV commercials.

Now, let’s look back to the original.

You don’t need to be a Disney stan to see the difference. This sequence instantly has more energy and personality than the live-action version, from the reaction shots to the way Genie leaps around the screen. It’s packed with visual comedy, as Genie disguises himself as a human and talks up Prince Ali to the crowd.

Originally, this role was built around Robin Williams’ comic talent. Much of the humor comes from his performance, whereas Smith delivers the same lines straight. For instance, when Genie sings that Prince Ali is “strong as 10 regular men” in the cartoon, there’s a visual gag of Genie magically giving Aladdin the power to juggle 10 men. The live-action version just involves Smith… singing the line. And Smith is not exactly a Broadway-level vocalist, so you wind up with a song that sounds and looks dull, without Williams’ comic timing.

Disney’s live-action remakes are commercially successful, but that success relies on audience nostalgia. So far they’ve all been pale imitations because you just can’t replicate the visual power of a stylized cartoon using real humans.

As one final comparison, let’s check out a big, splashy musical number that actually does work:

Moulin Rouge’s “Diamonds are a Girl’s Best Friend” has a similar setup to “Prince Ali”: An A-list star covers a classic song (“Diamonds” was made famous by Marilyn Monroe), in a crowd scene where other characters react to her performance. It’s a million times better than “Prince Ali” because the editing and camera work is dynamic, the choreography is vibrant and fun, and we get a real idea of everyone’s personality. It also tells a story that hinges on the main character’s charisma—exactly like Williams in the animated Aladdin.

Guy Ritchie—a filmmaker who specializes in macho stories about white English men—was always a puzzling choice to direct Aladdin. However, it’s not like he’s unfamiliar with big setpieces or visual comedy, given that he directed The Man from UNCLE and Sherlock Holmes. His Aladdin really shouldn’t be this bad.