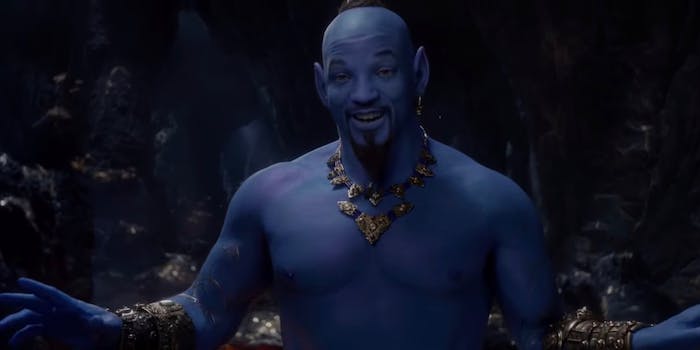 The one-minute teaser, which debuted during the Grammys Sunday night, had a lot to offer. It’s the first time we hear Jafar speak, we catch glimpses of Agrabah in the daytime, Jasmine, what looks to be a big musical number, and the moment Aladdin gets caught in the Cave of Wonders. But all of that is eclipsed by the very end of the trailer when Aladdin meets the Genie for the first time.

The dialogue is fairly on the unremarkable side. The Genie is aghast that Aladdin doesn’t know who he is, so he tries to throw out his greatest hits to jumpstart Aladdin’s memory. He sounds very much like Will Smith. But the Genie’s appearance? It kinda looks like a cheap and unfinished CGI nightmare.

First look at Will Smith as the Genie in the up coming live action Aladdin pic.twitter.com/yFLxrVJXv2

This looks like an auto insurance commercial that comes on at 2 am pic.twitter.com/RNyTNAgMBK

It’s so disturbing that you can’t look away.

“Hello. I’d like to talk to you today about video interpolation.” pic.twitter.com/iMywUVmMSY

This shows just how dangerous deepfake technology can be, something has to be done. pic.twitter.com/LjManECtNU

i'll never sleep again and it's all will smith's fault #aladdin pic.twitter.com/wUL79ZchIG

Will we ever be able to sleep in peace again? Debatable!

Will Smith as the genie looks like what one of those kids from the 90’s Fruit Gushers commercials would look like if they never found a cure for their fruit curse.

Will Smith genie is what appears in my room when I have sleep paralysis pic.twitter.com/NzMDOgvkkz

— Jenny Nicholson don't talk to me about Sonic (@JennyENicholson) February 11, 2019

According to Smith, who addressed his character’s look after the Entertainment Weekly cover came out in December, the Genie “will be CGI most of the movie.” So whether or not the Genie’s CGI appearance is indicative of how he’ll look for the rest of the film—it’s possible that Aladdin might tweak some things between now and its release—it looks like we’ll be seeing a lot of it.

Kinda makes you nostalgic for the Genie’s human disguise, doesn’t it?

The Genie (and his CGI self) will arrive in theaters May 24.