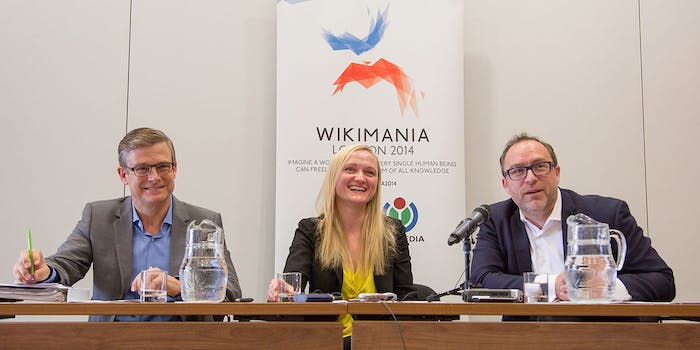 Wikipedia's spoiling for a brawl with the European Court of Justice.

The 10th annual Wikimania, the annual conference on all things Wikipedia, kicked off Wednesday morning with two major pieces of news: The Wikimedia Foundation has published its first ever transparency report, and it’s made an official condemnation of the controversial new European “right to be forgotten” law.

The Wikimedia Foundation is the non-profit organization that runs Wikipedia and its sister sites. The Foundation’s transparency report, which contains two years worth of data, reveals that the encyclopedia has received 304 “content removal requests” by individuals or organizations hoping to have their information scrubbed from the free encyclopedia. Of these, none were granted. Significantly more requests came from the United States, 105, than any other country, with the second-most-prolific country Germany issuing 50, less than half that of the U.S.

Takedown requests highlighted by in the report include an attempt by a French Intelligence agency to have a Wikipedia user delete information on a military base, a Tasmanian aboriginal language centre claiming copyright over an entire language, and a photographer attempting to remove a selfie taken by a monkey. All three were denied—in the last instance, based on the calim that the photo is technically the monkey’s photo, not his.

From July 2012 to June 2014, the Foundation has received 56 requests for user data, and provided information in response in 14 percent of these cases.

In the Wednesday morning press conference, which Wikipedia founder Jimmy Wales attended, the Foundation also formally announced its opposition to the European “right to be forgotten.” Following a ruling by the European Court of Justice (ECJ) in May, Europeans can appeal to have “outdated” or “irrelevant” information removed from search results provided by search engines—since then, Google has received more than 90,000 such requests.

Wales has previously spoken out against the ruling, describing it as “censoring history,” and he revealed in an interview with The Observer on Aug. 3 that Wikipedia results have already begun getting removed from Google in response to requests.

The Wikimedia Foundation has now officially spoken out against the ruling, and has pledged to maintain a page detailing all notices of “censorship” they receive from search engines (notices that search engines are under no legal obligation to provide).

“Censored” results include the Wikipedia page for Gerry Hutch—”an Irish convicted criminal, alleged to have been one of Ireland’s most successful bank robbers.” The Foundation however cautions against assuming that it was necessarily the subject of an article that served a removal notice, as they “do not know who requested each removal… [and] others may have had the opportunity to make such a demand.”

The Wikimedia Foundation’s page joins a growing list of tools designed to circumvent the controversial European ruling, including Hidden From Google, a site that aims to compile a list of all links that have been “censored by search engines.”

“The European court [has] abandoned its responsibility to protect one of the most important and universal rights,” Wikimedia’s official statement reads, “the right to seek, receive and impart information.” The ruling “is underming the world’s ability to freely access accurate and verifiable records about individuals and events,” and “punches holes in free knowledge… Denying people access to relevant and neutral information runs counter to the ethos and values of the Wikimedia movement.”

The ruling has come under widespread criticism, including a damning report from the British House of Lords describing it as “unworkable, unreasonable and wrong,” and free speech advocacy group Index On Censorship likened it to “marching into a library and forcing it to pulp books,” the BBC reports.