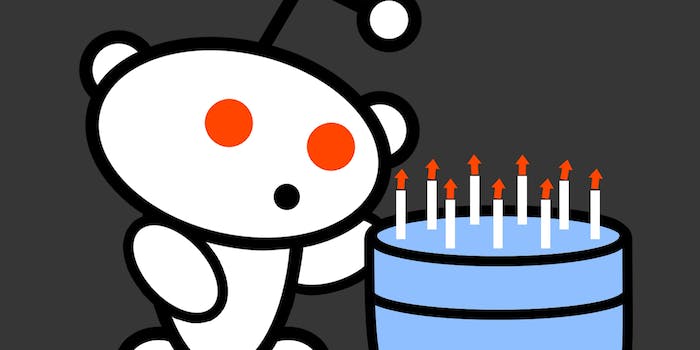 Moderators are gatekeepers, peacekeepers, and curators—Reddit’s hardest workers. Is it time for them to become more than volunteers?

This is Reddit’s most persistent conspiracy theory.

It’s ensnared a beloved Reddit cofounder, some of the world’s most recognizable news organizations, and an endless list of moderators—a volunteer army of users responsible for managing the content submitted on the site’s more than 7,700 communities.

The theory hinges on the phrase “paid shill,” which is used to describe Reddit users who are hired by companies to surreptitiously promote their content or quell bad press. The phrase has been thrown around so often on Reddit, it has become an inside joke. It pops up when a redditor posts a dissenting comment or when a moderator removes a post.

“I can’t begin to tell you how many times I’ve been accused of being paid off by [an] organization because one of our moderators removed a post or deleted something,” longtime moderator theredditpope told me. “This topic has really grown over the past few months: Browse any reddit thread discussing censorship or Reddit moderation and you’ll find a vast wealth of comments decrying the perceived notion that ‘moderators are being paid to censor content,’ or ‘users are paid to post certain threads.’”

It’s so much of a joke that even when an actual paid shill decides to spill his or her guts and admit to gaming Reddit’s system, no one takes it seriously.

Redditors may openly chuckle at the idea of getting paid to use Reddit. But it’s not as crazy as they think.

Ian Miles Cheong, a.k.a. SolInvictus, was outed in the spring of 2012 for moderating large subreddits like r/WTF, r/AskReddit, and r/Politics, while getting paid by a Boston-based marketing company to post content. Cheong was ultimately banned from Reddit by administrators.

This is Reddit’s great conundrum. Moderators are expected to abide by and enforce Reddit’s agreements, rules, and wiki. They must do so while policing communities with hundreds of posts and millions of pageviews a day. If moderators break any of these rules, or collect any “form of compensation or favor from third-parties,” administrators have the right to “revoke that position for any user at any time.”

Longtime redditor solidwhetstone perhaps summed up the plight of the moderator best in this comic: 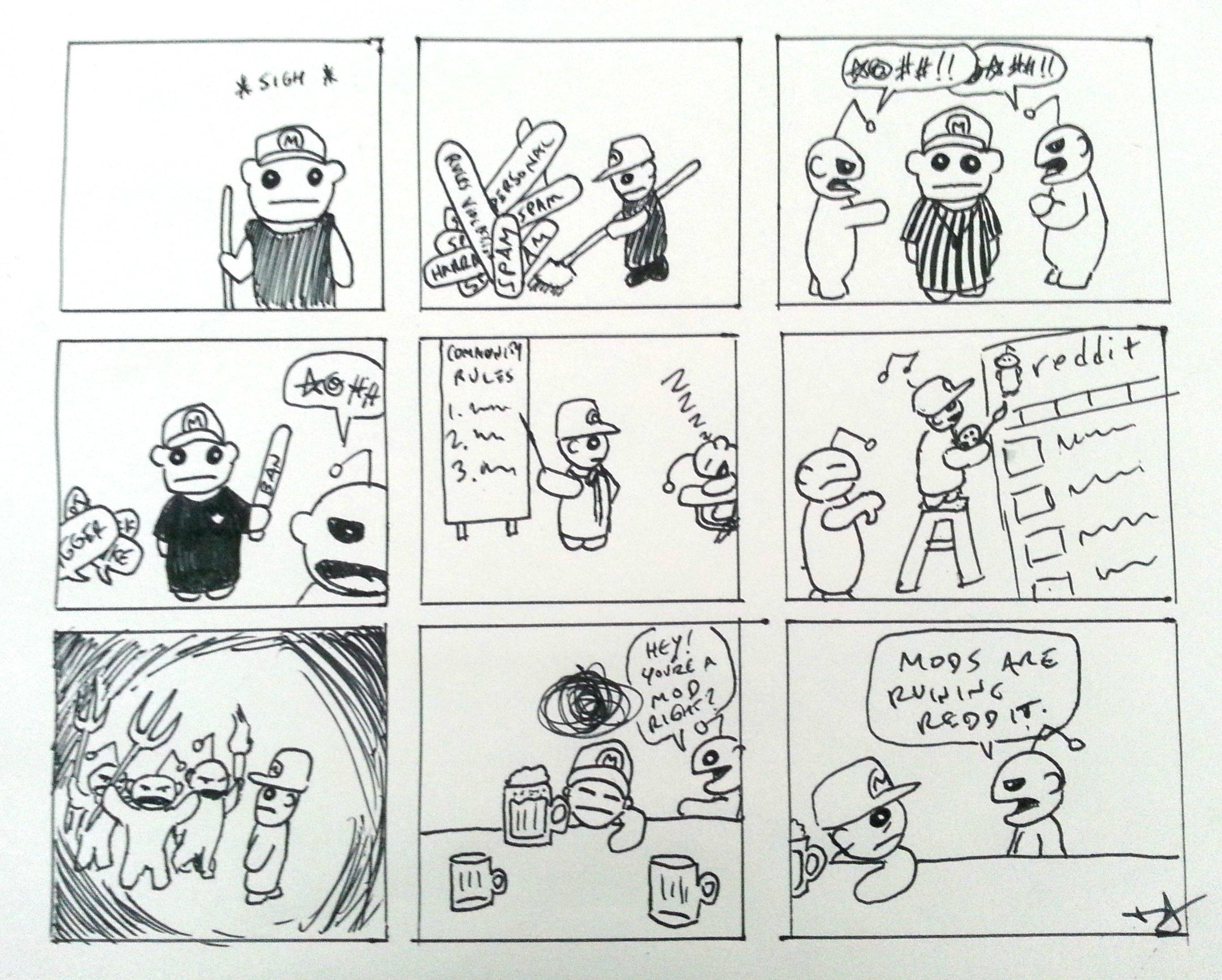 On Monday, Reddit celebrates the nine-year anniversary of its first submission—June 23, 2005. Is it time for its moderators to become more than volunteers?

This is the question I posed to five different redditors over the past three months. Each one has moderated subreddits with more than 2 million subscribers each. Their moderator resumes include: banning links to RT.com and to a Glenn Greenwald bombshell on r/news, presiding over r/politics at the height of its moderator and banned-domain drama, and conducting an extensive investigation to get Quickmeme banned sitewide for spamming and vote manipulation.

The Quickmeme saga in particular was a watershed moment for moderators. At the time, the site was the second-most-popular domain submitted to Reddit. The service let users quickly create image-macro memes like Scumbag Steve, Overly Attached Girlfriend, and Confession Bear.

The moderators I talked to have invested countless hours into the site and have still been called paid shills. But most of them emphatically rejected the idea of accepting one cent from Reddit for their services.

“I think paying moderators is wading into dangerous territory,” one longtime moderator, who asked for his username to be omitted, told me. “Do you pay by mod actions, or tenure? When I was a mod of r/AdviceAnimals”—home to all things meme-related—“half the mod team didn’t do anything. You would need an entire accounting team to coordinate who would get paid. I don’t think it’s cost-effective. Beyond the numbers, there’s already a number of default mods who get off on just being in that position. I like to joke that I can’t get an erection unless I ban 10 people a day, but there really are people who thrive on that kind of power, or at least the outward appearance of it.”

Bipolarbear0, a moderator of r/news, was involved in the RT.com drama from Septemeber and the banning a Greenwald expose in February. “Since Reddit moderation is a volunteer position,” he said, “there’s no really solid baseline for how a moderator should act, and oftentimes you’ll see character traits or actions which are incompatible with what you’d expect from a paid employee.

“If Reddit were to finally undertake the task of compensating moderators, this issue would come into play in a major way: Who would stay, who would be ‘cut,’ and most importantly, would subreddits still have the independence of choosing their own moderators if the Reddit admins are paying them?”
While each moderator dismissed the idea of getting paid by Reddit for his or her work, a few entertained the idea as long as an infracture was in place to actually support it. This would include a rubric to determine how much it costs to perform certain moderator actions and a way to track how a person is working.

“A huge logistics issue is raised when you’re dealing with providing financial compensation for even a small group of mods (such as every default moderator)—how would they be compensated, would they file taxes, would they be listed as contractors or employees, and how would you choose which moderators are compensated and which are not?” bipolarbear0 suggested.

“Do I believe moderators should get paid? It would be nice, sure, but there’s absolutely no way to determine an objective measurement for anything like this,” said manwithoutmodem, a former r/AdviceAnimals moderator, who also helped bring down Quickmeme. “Some moderators mod tons of subreddits and do nothing. Some moderators mod one subreddit and spend all day doing things. How to calculate those things is impossible. How much is organizing an AMA worth, vs. clearing x number of things from the modqueue, vs. helping y number of users in modmail?”

The one issue these moderators didn’t raise was whether Reddit could even afford to pay moderators at all. And that’s because the answer is pretty simple.

As a private organization, Reddit is not obligated to release any financial statistics. But there are plenty of indicators to show that business is better than ever.

Since March, Reddit has hired 17 new employees (see the announcements here and here), including programmers, sales associates, and a Salt Lake City office manager. RedditGifts, a world gift-exchange program, is more popular than ever. Last year’s Secret Santa exchange involved 117,958 participants across 161 countries; Reddit administrators take a “15 to 20 percent cut of every purchase,” Reuters reported. In April Reddit invested an undisclosed amount of money in Imgur, a popular photo-sharing site started by a redditor. Big brands like Syfy, HBO, and FXX have spent money on Reddit ads.

And if all continues as planned, Reddit could net about $600,000 this year from Reddit Gold, a monthly subscription to extra features on the site. This figure was calculated by Nathan Reed of Australia, who tracks Reddit Gold data on gold.reddit-stream.com/. It is an estimate because Reed couldn’t determine how much Reddit pays Paypal to use its services. He was also unable to factor in the year-long gold subscriptions ($30 each) administrators awarded to each default subreddit moderator in January.

Despite tracking this growing Reddit Gold figure daily, Reed was opposed to the idea of paid moderators, citing a 2006 blog post from programmer and writer Joel Spolsky called “The Econ 101 Management Method.”

“Basically if someone does something for free, they try to do a good job because of pride and so on, but once you start paying them, they end up doing the amount of work they are getting paid for,” Reed said. “Or to put it another way, the mods might be happy now doing 10hrs a week for free, but they probably wouldn’t be happy doing that same amount of work for $2/hr. Its kind of counterintuitive, but I find it to be true. I think this is the reason, for example, that Wikipedia has much much better content than those how-to sites that pay $2.50 (or whatever) per article.”

Cheong, the exiled moderator, is currently the editor-in-chief of Gameranx, a gaming news site. He admitted that he feels bad about being banned and violating the trust of other moderators, even if what he did at the time wasn’t explicitly against the rules (Reddit added its clause regarding third-party payments on April 29 this year).

Cheong still uses Reddit, but only as a user, not a moderator.

“I do think volunteer moderators are some of the hardest-working people on Reddit, and it’s to their credit that Reddit is as popular as it is,” Cheong told me. “I think it would be only fair if they were paid for their efforts.”