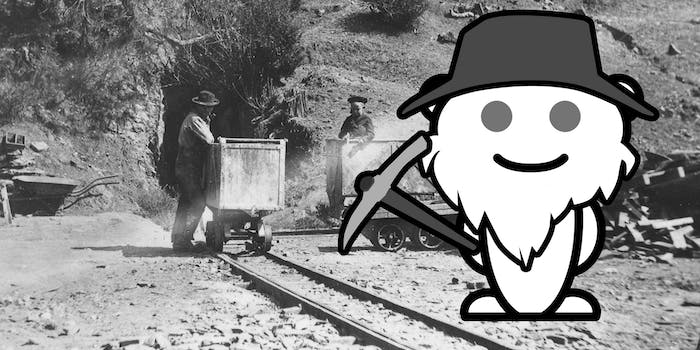 “[Today I learned] that despite having 70+ million viewers, Reddit is actually not profitable and in the RED."

It may have taken redditors three months to notice that their favorite Internet hub is not yet profitable, but in typical Reddit style, they’re making up for lost time—by giving the site a little pot of Gold.

On Thursday, redditor RyuKenya sounded a site-wide alert, posting on the popular subreddit /r/todayilearned to share a link to a Business Insider article from July:  “[Today I learned] that despite having 70+ million viewers, Reddit is actually not profitable and in the RED. Massive server costs and lack of advertising are the main issues.”

Reddit Gold is a monthly subscription to extra rewards and site features on Reddit. Reddit culture promotes the idea of redditors gifting each other Gold, or “gilding” them, for comments they love and consider exceptional. This encourages higher quality of discussion and helps sustain the site. While the benefits may be minimal, especially if you’re not American, Reddit Gold has become a cornerstone of the site.

So when RyuKenya got everyone’s attention, the Reddit gilding machine kicked in as a quick, fun, and easy way to give the site a boost. On threads across the site, like “Let’s get Reddit out of the red!” on the popular /r/AdviceAnimals, comment chains sparkled with gold.

“What exactly does gold do?” asked redditor CLDBL00DED on one thread. In response, they were promptly gifted gold.

An ecstatic Redditor staff updated the Reddit blog on Saturday to describe the outpouring of generosity:

[P]eople contributed by gilding, purchasing reddit gold subscriptions, cross posting and making positive comments all over…. Over the time period [between Thursday and Saturday morning], there were 72.17 gilds per hour (GPH).

“[I] just want to say i dont even know what the gold means and that i just bought it cause im scared reddit might go away one day,” wrote newly-gilded redditor baxuz on the /r/GoldBenefits subforum. Several other users commented that they just wanted to get in on “Gold Rush ‘13.”

Elsewhere, other crowdfunders were paying attention—like John Green, the popular author and YouTuber who with his brother Hank Green recently launched Subbable, a monthly crowd-supported subscription system for web series:

Reddit users find out the site is losing money and immediately fund it. This is the future: https://t.co/gwyELIKbhg

But Reddit’s profitability battle won’t be won overnight. Despite the outpouring of love over the weekend, today’s daily Gold goal is currently only at 37 percent. The “gold rush” appears to be over all too quickly.

Gilding other redditors will doubtless remain a staple of Reddit culture, but if Reddit plans on using subscriptions as its primary revenue stream, it’s likely investing in fool’s gold.