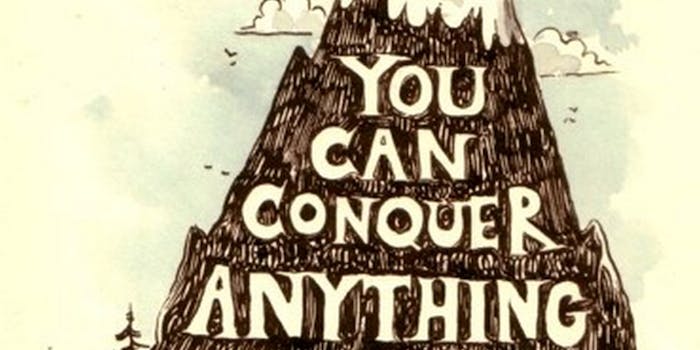 Nice try. Kelly Bastow was surprised to find her drawing of a man and a mountain printed on Forever 21 T-shirts without her permission. It's not the first time Forever 21 ripped off an Internet artist.

About a year ago, artist Kelly Bastow posted an illustration on Tumblr of a tiny man staring up at a mountain with the phrase “You can conquer anything” emblazoned on the side of it.

“I try to spread motivation and positivity with my art, and sometimes include inspirational quotes,” Bastow told the Daily Dot.

Now, after finding out that the clothing retailer Forever 21 had featured that design on a men’s T-shirt without her permission, the phrase has taken on a new meaning.

Bastow, who is best known as moosekleenex on Tumblr and DeviantArt, was tipped off to the thievery by fellow artist Briani two days ago when she discovered the shirt being sold online. 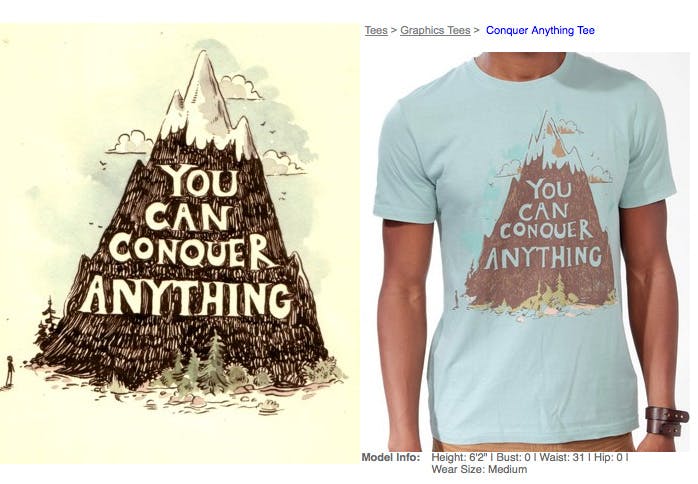 “I felt very hurt and kinda flabbergasted,” Bastow said. “I mean, Forever 21 is HUGE. I didn’t think my work would wrongly end up on the apparel of such a big company.”

This 21Men’s graphic tee was purchased from a third party vendor and as soon we received word we removed the item from our inventory and contacted our vendor.

The answer was unacceptable, Bastow wrote on Tumblr.

“I want compensation, an apology, and a more detailed explanation as to how this happened,” she blogged. “Forever 21 and other huge clothing corporations need to be more vigilant about finding the source of their designs, and make sure their images aren’t stolen from hardworking independent artists. I’m not gonna let this go. Who knows how many other artists are being ripped off like this?”

One artist who has seen this sort of thing happen is Louie Chin, a New York–based illustrator and designer who has done work for The New York Times and Wired U.K. In an email to the Daily Dot, Chin shared two examples of Forever 21 swiping designs from Flickr and Threadless, an online T-shirt company where all the designs are made and voted on by the community.

Not to mention, countless other cases highlighted on WTForever21, a blog that highlights “those few misses” the company makes.

“Nothing like this happened to me before (not that I know of?) and I have no idea how to fight this other than getting the word out to get the products taken down,” Chin added. “Figuring how to prevent it from happening is another story.”

To help protect herself and her work, Bastown plans on signing her work more often. While that hasn’t helped Tumblr artists like Benjamin “frogman” Grelle from having his work pilfered in the past by other Internet users, Bastow hopes it will at least give big companies pause.

“It just sucks that this happens so often,” she said. “Artists pour themselves into their work and sometimes it’s very personal. To see someone else taking credit for it, or to see it plastered on shirts without your consent, is very troubling.”