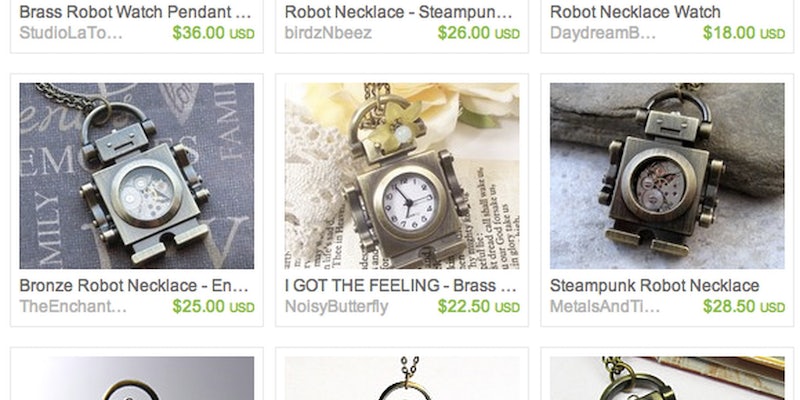 The CEO, Chad Dickerson allegedly once promoted a mass-produced factory item on the handmade crafts site. Users are not happy.

Etsy CEO Chad Dickerson has assured sellers that he’s been listening to their concerns about resellers, people who pass off factory goods as crafts, on the site.

Apparently, it wasn’t enough. The Etsy community is still angry and looking to stoke the controversy.

Today, Dickerson was the subject of a seller witch hunt for favoriting and promoting a supposed factory item back in April 2010.

Etsy parody site Regretsy lampooned Dickerson today for featuring what appears to be a mass-produced robot charm necklace in a robot-themed craft treasury he’d titled, “Welcoming our new overlords.” Dickerson had curated the list in 2010, more than a year before becoming CEO.

Although the seller lists the robot charm under handmade items, Regretsy blogger April Winchell posted a photo of dozens of duplicates. Readers also found at least 16 other clones of the allegedly handmade charm

Now, community members are pouncing on the opportunity to attack this perceived laxness towards resellers.

“Did you mean to use mass produced robot pendants in this treasury, or is it a statement?” asked Sallie in the comments section.

“I love the irony of welcoming our new overlords,” wrote FlossieKnits. “Why not just make etsy a mass-produced tchotchke shop and call it a day. there’s got to be a better way.”

Dickerson has yet to make a response, but there’s no doubt he’s listening. Though he’s received criticism for turning a blind eye to the Etsy reseller problem, he’s addressed this scandal head on.

The CEO makes a point to stop by the forums often, like in this weekend thread in which sellers talked about him.

“I read all of the convos sent to me, and try to answer as many as I can,” he wrote.