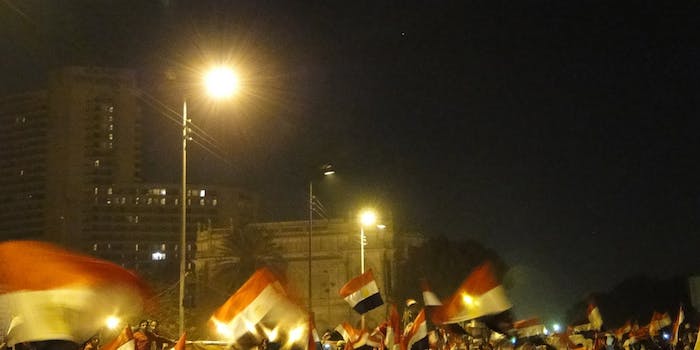 Redditor reports from the front lines of the protest in Tahrir Square, claiming "[W]e're not letting you control this country anymore."

Egypt is once again engulfed in protests and violence. And, once again a Tahrir Square protester is turning to social news site Reddit to speak to the world.

Last spring, redditor sayyeddy detailed with urgent clarity his violent clashes with former President Hosni Mubarak’s security forces, and subsequently, how he was arrested and tortured. Those protests were ultimately successful in removing Mubarak from power.

Now, protesters have returned to Tahrir Square in an attempt to force the ruling military council to hand control over to a civilian transitional government. At least 22 people have died so far, with the renewed violence entering its third day.

And sayyeddy, who is once again on the scene in Cairo, is taking questions.

Here are some of the highlights from sayyeddy’s latest conversation with redditors.

Q: (bababenjo): “Is public anger the same as it was when you guys rose against Mubaarak?”

A: “It’s even more than before, prices are high, major inflation, tourism jobs were lost, but more importantly we’re suffering everyday from the Police withdrawal from many cities and their ultimate hatred to this revolution, take money and security from people and they’ll be pretty angry.”

Q (uhuhshesaid): “What do you think the military could do at this point to appease the protesters? With elections coming up, are there certain steps you’d like to see them take? Besides, of course, the obvious of the police not attacking those in Tahrir Sq, is there any concrete proclamation or actions you’re looking to achieve?”

A: “A defined date for elections of the next president, a constitution that doesn’t shield the military from public oversight, immediate resignation of the current government held by PM Essam Sharaf and a fair investigation of the overuse of violence against protesters and putting whoever responsible in front of the public opinion.”

A: “Advice: Be prepared and don’t be afraid. Thoughts: Good for you Americans trying to reclaim your country, you’re risking everything for a brighter future, I hope you get it.”

“We’ve been facing police and military police brutality for 16 hours, I’ve seen more than 5 people dead by gun shots, there are reportedly 10 dead from yesterday’s events alone, fuck the Supreme Council of Armed Forces, we’re not letting you control this country anymore, I’m leaving here either dead or after the resignation of those motherfuckers.”